Above the mural of Tommy Flowers by street artist Jimmy C.

A number of the Geezers went along to the opening of The Tommy Flowers pub on Thursday 3rd May 2018. It’s at 50 Aberfeldy Street, Poplar, London, E14 0NU. 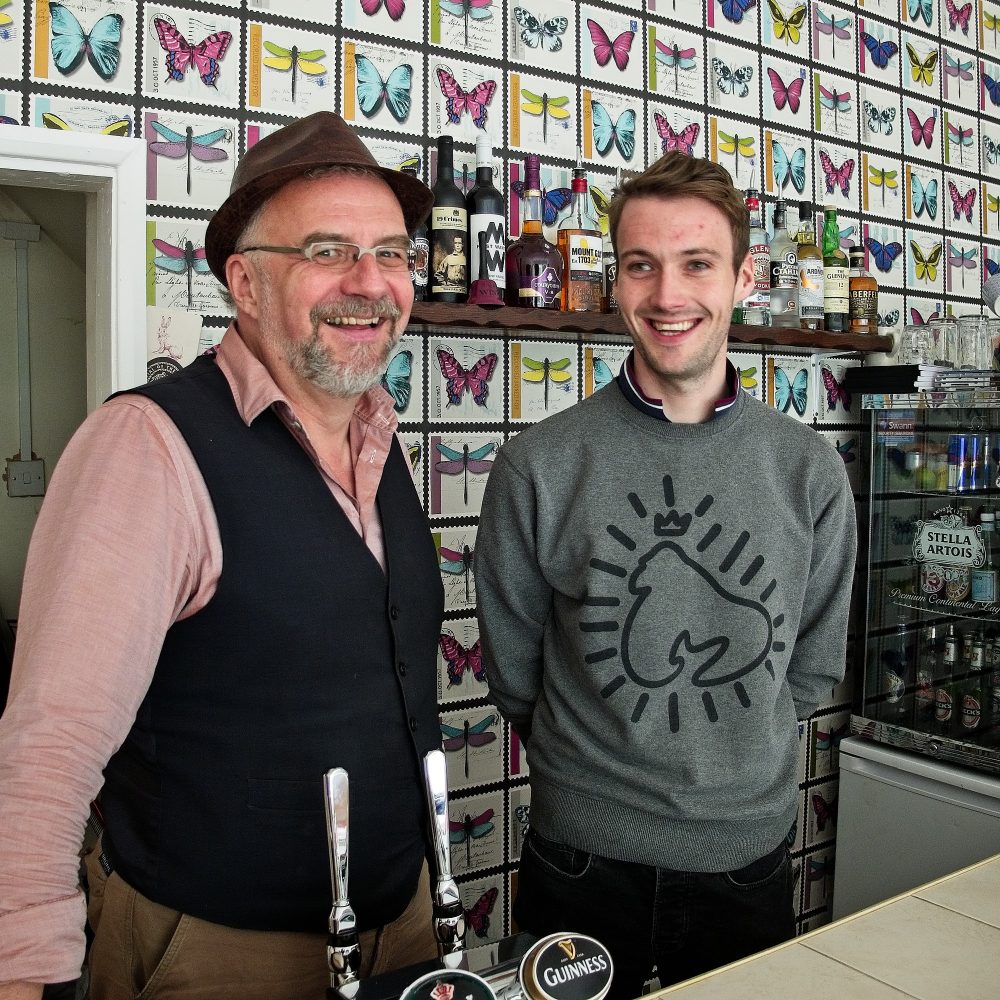 I dropped in on Friday and was welcomed by Garry (L) and Liam (R) in the photo above. They know a lot about the back history of the Aberfeldy (the estate and the pub), and have worked really hard to get a community space and local pub up and running. Liam has been working on Aberfeldy Big Local for over a year, and they managed to get a £1m lottery grant! They are going to spend the money over eight years to benefit local people and to make the area a better place to live. A Community Chest has been established which is already funding a football team, box fit and circuit training, yoga classes, healthy cooking classes, the Poplar Singers, and more.

The previous pub, The Aberfeldy, was at 26 Aberfeldy Street and had been built in 1959 as part of the new estate. It was pulled down in 2015 during the re-building of the estate. Liam said to me, “After the pub closed local people lost their meeting place and the area became like a ghost town at night.” People campaigned for a new pub to be built, and were offered an empty shop. It is operating as a community space from Mon-Weds, and as a pub Thurs & Fri 5pm to midnight, Sat noon to midnight, Sun noon to 11pm.

Garry has a background in arts management and has run projects like this before. The team on the Aberfeldy Estate have done really well to get this far, and I’m sure this project will be a great success. 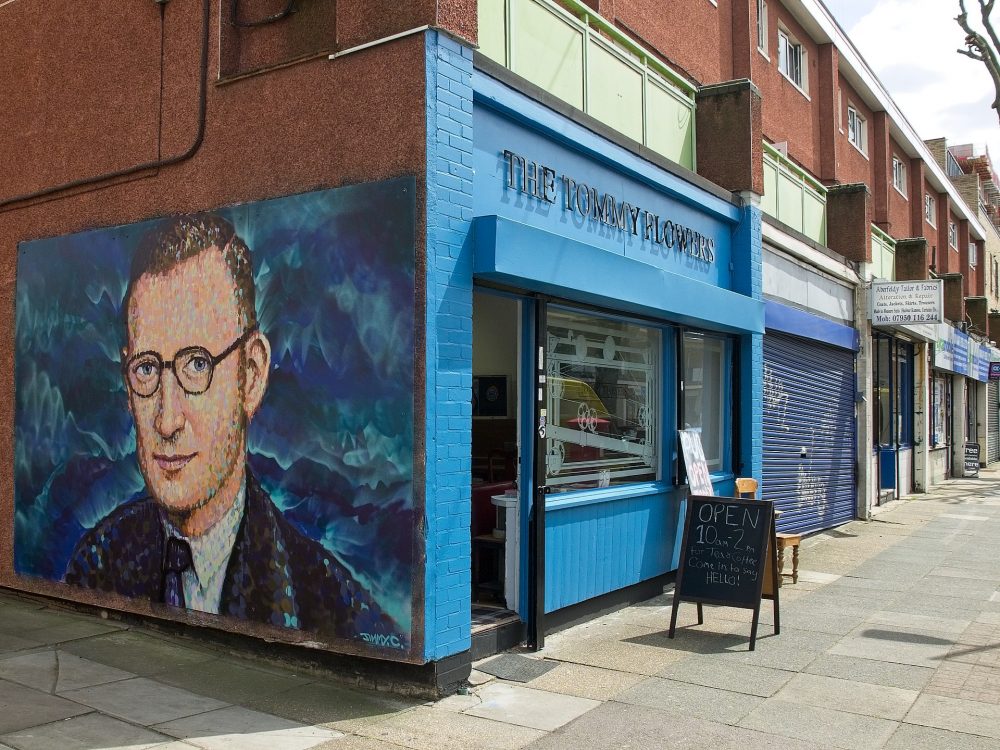 The original Aberfeldy Tavern was 100 yards away at the southern end of Aberfeldy Street at 357-359 East India Dock Road. It was destroyed by bombs in WW2 and replaced with a pre-fab building until the Aberfeldy Estate was built.

Below detail from the 1910 Post Office Directory showing the Aberfeldy Tavern at 357 East India Dock Road on the corner of Aberfeldy Street. 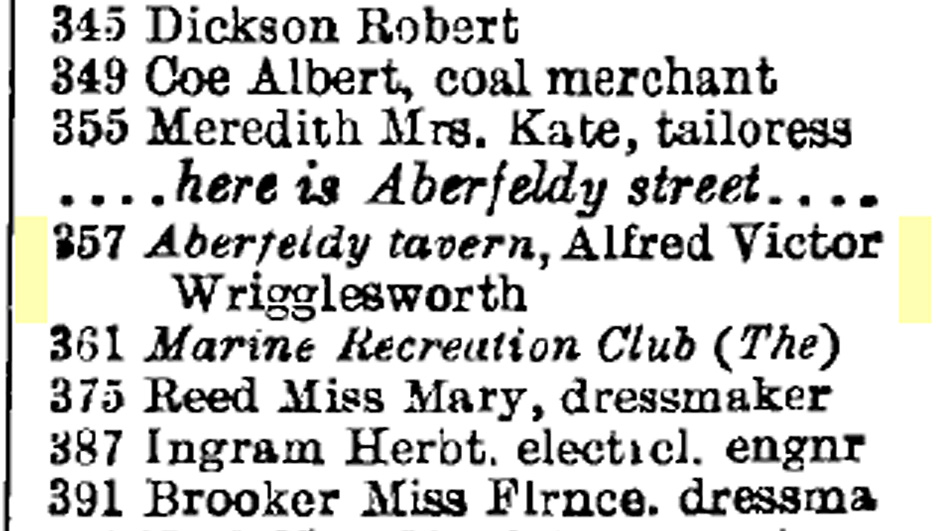 Below the site of the original 1865 Aberfeldy Tavern on East India Dock Road (as best as I can establish). 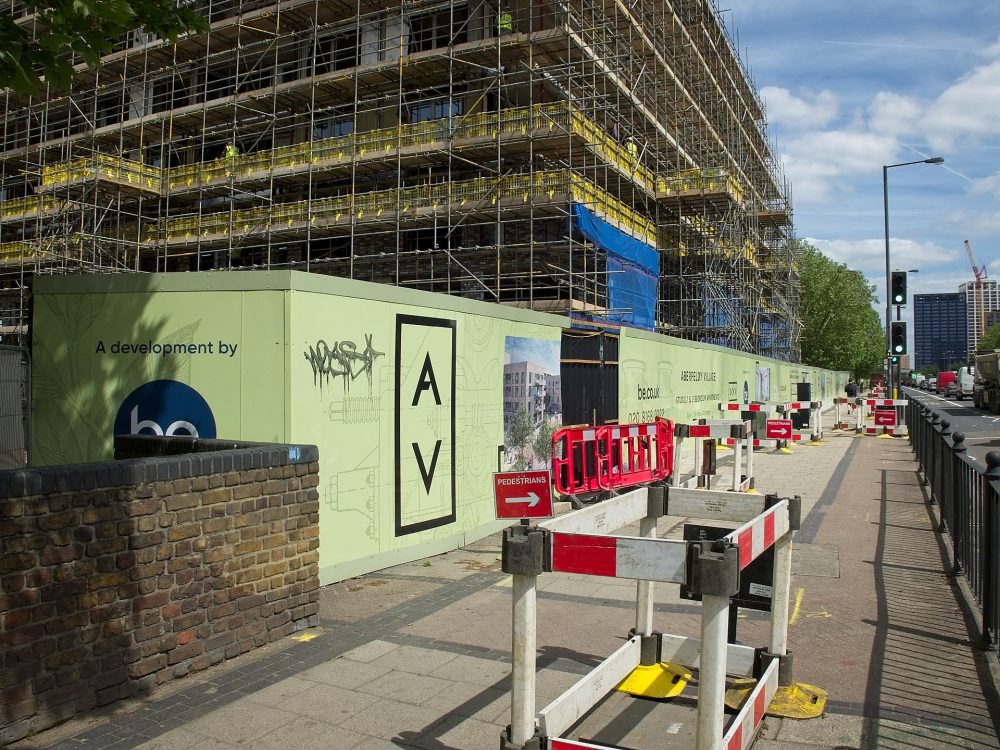 Tommy Flowers (1905-1998) was born a short walk away at 160 Abbott Road, Poplar. He first worked as an engineer with the British Post Office, then went on to design Colossus – the world’s first programmable electronic computer. Wikipedia says: “The prototype, Colossus Mark 1, was shown to be working in December 1943 and was operational at Bletchley Park by January 1944.” It was able to read the German Lorenz Cypher in real time.

Since writing this I’ve been to Bletchley Park where they’ve rebuilt an old Colossus computer that was built by Tommy Flowers. Read the story here.

The Tommy Flowers Pub Facebook page gives this link on the BBC iPlayer for a film about Bletchley Park which starts just after 19 mins in.

Edith’s Streets says:  “The area was originally developed with small terrace houses from 1864-85, first by David Mclntosh, hence the Scottish street names, and from 1873 by the chemist turned developer, John Abbott, whose works were at Iceland Wharf, Old Ford.” 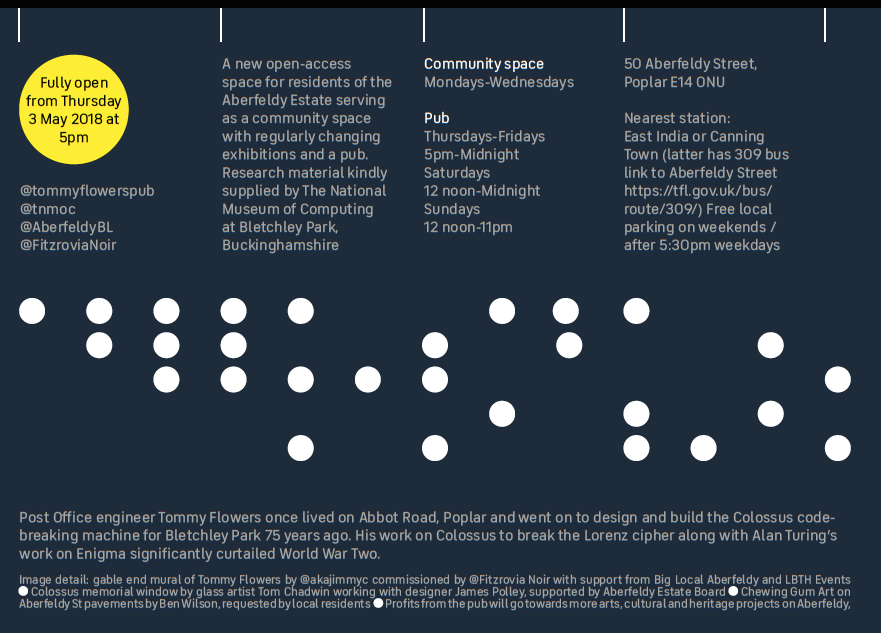