Today we were at home for the second time on the bounce, our opponents the formidable May and Bakers. Our first meeting was our very first match which ended in an all to one sided loss so it was time to try and put things right now that we are a much stronger side than we once were.

Kick off started under a bright winter sun and the Gatcliffe boys began to hold the ball well. With the wind in our favour we would certainly need to try to take an early advantage as we well know today’s opponents are solid in every position on the pitch. One on one battles were a plenty and our boys seemed to be winning the majority, which was nice to see, as the May and Baker boys are a very confident side. The wind was blowing up, and like a change in the breeze, we found ourselves under attack. A long range effort floated against the strong wind dropped in the back of the net over the top of the Gatcliffe keeper putting us undeservingly behind. The boys continued to battle and maintained the pressure which led to a number of consecutive corner balls. A nice cross dropped into the six yard box was scrambled over the line by the awaiting striker to go all square. Going into halftime level was a must as we would soon have the wind against us. Another floated shot was directed towards the top corner and as if floating with the wind the Gatcliffe keeper manage to get an all important glove on the ball sending it onto the crossbar and out for a corner kick. As the whistle blew up we had done it “all even” at halftime. 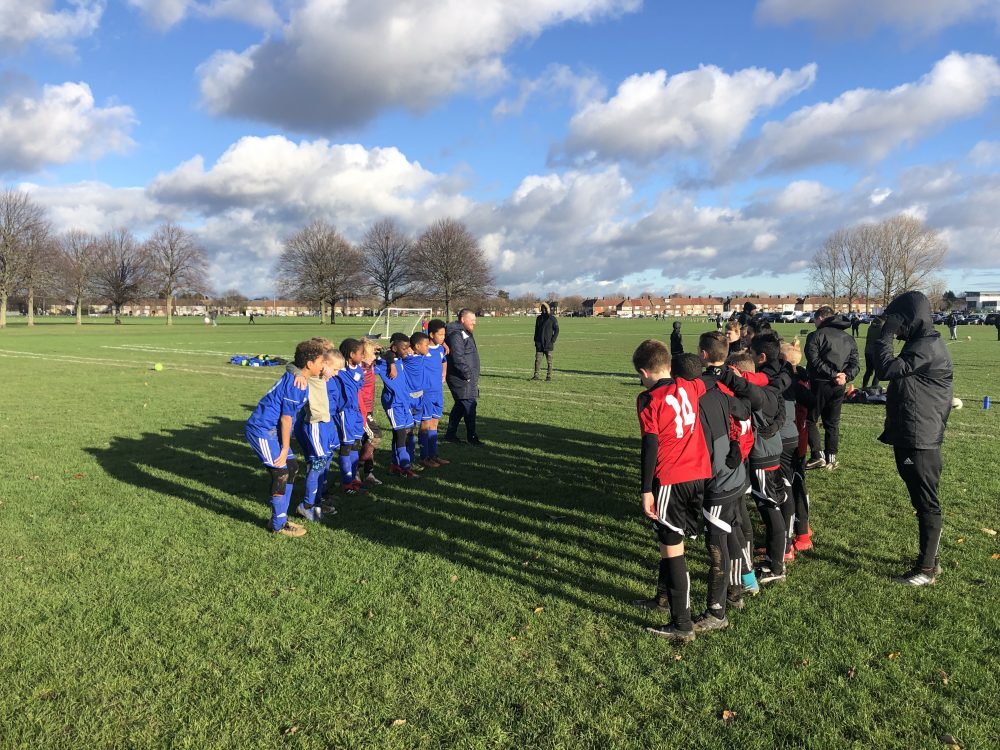 The team talk would be straightforward, simply continue the way we were and to try to keep up the high work rate. The second half got on the way and both sets of boys were going for it. May and Bakers took the first chance with another shot going with the wind but the Gatcliffe keeper once again somehow managed to pull off another gravity defying save to the disbelief of the shooter. A save that was later described as the best save he had made all season. Gatcliffe feeling somewhat relieved got straight back to business on the attack, and some nice passing led to a great chance with the shot just going wide. May and Baker now with strong winds blowing in their favour played a high long ball from the goal kick to the awaiting attackers who this time slotted the ball passed the goalie.

Once again just behind on the score sheet Gatcliffe came looking for the equaliser and the chance came quickly. Some slick passing through the May and Bakers defence and we were faced with an almost open goal but still a little unsure as to how we’d got into the position we rushed the shot and a miss kick took the ball out for another goal kick. Knowing that we should of been on level terms the Gatcliffe boys were eager to get one back and this saw our well organised defence pushing further up the pitch and leaving a bit more space in behind which May and Bakers managed to take advantage of putting their last chance away.

Although the result may say different, the performance was as good as I’ve seen all season. The boys were up against a real tough team who have been getting the better of most teams within the league and were unfortunate not to get a fair result.

Well done again boys. Some shooting practice is on the agenda at the next Gatcliffe training session 👍