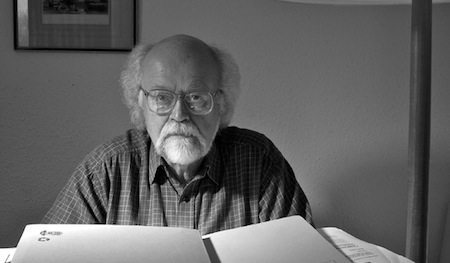 We would have lost a lot more of the diminishing architectural heritage of the East End if it wasn’t for the tireless campaigning of Tom Ridge.  Tom Ridge is the man behind current  attempts to preserve the industrial buildings of Fish Island and Hackney Wick from  destruction by the developers. See our previous post .

It was Tom  who discovered that an old building by the canal had been used by Dr Barnardo and was responsible for saving it, and creating the Ragged School Museum there – “because there should be a museum of the East End in the East End.” It was he who led the successful campaign to save the Bancroft Rd Local History Library when the Council would have preferred to close it down and sell off the collection. It was he who prevented buildings being constructed upon the small public park at the heart of Bethnal Green, by ensuring it was listed as of historic importance.

Find out more about him and his campaigns to save the East End’s architectural heritage  in  Spitalfields Life.

You can also find there “THE MODEST WONDERS OF HACKNEY WICK”,  a series of photos recording the industrial heritage of The Wick.