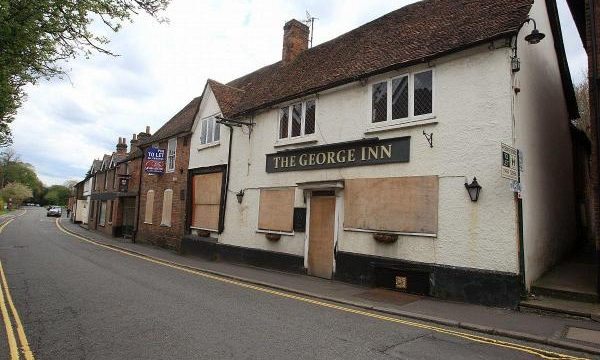 A contributor to the Where’s My Boozer Gone Facebook page has brought to our attention two fightbacks against pub closures.  Although they are not in East London it does show that people power can resist the developers.

This one is in the country

A man whose family used to own a pub has said he wants it restored to its former glory – as villagers launched a campaign to raise £2.5million to keep property developers at bay.

The George in Great Missenden has been closed to punters for several months and has started to fall into a state of disrepair.

Former regulars at the pub, in High Street, fear it could be converted into flats, with rumours plans have been drawn up circulating in the village.

York Woodford-Smith, whose parents Guy and Sally Smith ran The George for 16 years, said he is desperate to help restore the 500-year-old pub to its former glory.

But with developers keen to get their hands on it, and with a hefty repair bill likely, Mr Woodford-Smith admits it’s a tall order.

He said: “My parents owned it from 1985 until 2001, and since then it’s had no investment whatsoever.

“An architect has come up with plans to convert it into dwellings, into flats.

“It’s a shame to see it go. There’s a lot of local people who would like to see it brought back, but it would be such a huge project. It would be a pretty big undertaking for anyone going in there, it would probably cost several million pounds.

“I often walk past it and dream of the day I could go in with my dad and my friends and bring it back to its former glory. In the 80s and 90s it was a hugely successful place.

“It would be great if it could be a high-end establishment and encourage people to stay in the village.”

Residents have launched a fundraising website, hoping to raise £2.5million to restore the pub building and an associated barn to the rear of the property.

The website, which went live on St George’s Day, says: “Our mission is to not only restore the fabric of The George and The Barn but also to return these historic buildings to the community. The George being returned to its function as a pub and The Barn being turned into a visitor’s centre and community venue.”

No formal application to convert the building to housing has so far been submitted to Chiltern District Council, which handles planning matters.