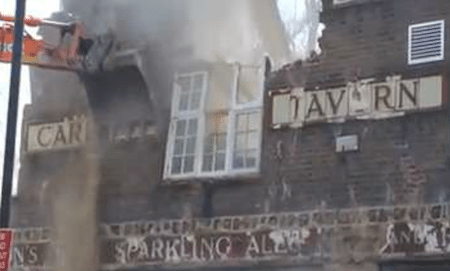 A contributor to the Where’s My Boozer Gone Facebook page has brought to our attention two fightbacks against pub closures.  Although they are not in East London it does show that people power can resist the developers.

This one is in West London.

Pub must be rebuilt brick by brick, orders council, after developers tore it down to build flats

The owners of a historic London pub who triggered outrage by demolishing it without permission are to be ordered to rebuild it brick by brick.

Council chiefs will next week issue an unprecedented enforcement notice to the firm that owns the Carlton Tavern in Maida Vale requiring it to “recreate in facsimile the building as it stood immediately prior to its demolition”.

The owners, Tel Aviv-based developers CLTX Ltd, ordered bulldozers in to reduce the early 1920s building to rubble earlier this month after staff were told to stay at home for an inventory.

Robert Davis, deputy leader of Westminster council, said he was “absolutely horrified” at the “scandalous” destruction.

The enforcement notice is scheduled to be approved by the council’s planning committee next Tuesday. That will stop the owners from selling the site until the building has been restored.

It is thought this is the first instance of a local council ordering a building be reconstructed from the ground up.

The council has arranged for the pub to be listed as a non-designated heritage asset, a status which should prevent it being pulled down in future.

In January, Westminster threw out a planning application to replace the redbrick pub with flats.

Shortly afterwards the Government announced plans to strengthen protection for England’s pubs to prevent them being demolished so readily. Historic England was also considering a recommendation of listing at Grade II for the site, saying it was “remarkably well-preserved externally and internally”.

But on April 8 pub staff were told it was to be closed, and bulldozers moved in to the shock of local residents.

A report to the council’s planning committee from its director of planning, John Walker, said: “An asset which was a listable heritage asset has been demolished in breach of planning control. In these circumstances it is not considered that other lesser steps are possible to address the harm other than to require complete rebuilding.”

CLTX is appealing the decision to refuse consent and if it wins the company may be able to press on with the redevelopment of the site. CLTX director, Israeli tax lawyer Ori Calif, was not available for comment. CLTX’s agent Kieran Rafferty, of KR Planning, said: “I am not authorised to comment.”