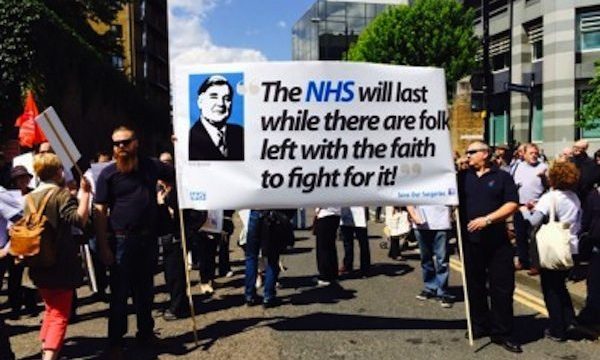 Due to NHS cuts, GP surgeries in Hackney, Tower Hamlets and Newham could close!

After the fantastic ‘Save Our Surgeries’ protest in Tower Hamlets on 5 June, join us on the 66th birthday of the NHS, to defend doctors’ surgeries wherever you live.

We will march through the streets of east London behind Nye Bevan, founder of the NHS. We’ll have a double decker bus, music and street artists, and a rally at the end. Route and speakers to be confirmed.

So, what’s the problem?
Due to Government changes in the way General Practice is funded, some inner- city and rural practices in England will suffer big budget cuts from April 2014.
(MPIG) payments were introduced in Minimum Practice Income Guarantee 2004 to ensure practices in deprived areas with a high turnover of patients, and practices in sparsely populated areas,  had enough money to deliver high quality General Practice services.
Now the Government plans to phase out these payments over the next seven years.
All the evidence shows that one of the biggest factors affecting your health is poverty. Phasing MPIG out means that east London and other inner-city areas will lose out even though high levels of poverty mean that more people have serious long-term illnesses at a much younger age. The cuts also affect people in rural areas. The whole of General Practice in England is in crisis due to relentless NHS cuts. We don’t want to rob Peter to pay Paul – we demand that all surgeries are funded properly.
If the cuts go ahead, there will be cuts to the GP surgery services you and your family use.
For example, Westbury Road Medical Practice off of Green Street, is one of a number of Newham practices offering high quality services that are facing cut. Like the other surgeries, it will lose large amounts of money due to government cuts. This means fewer staff and a worse service for patients. ‘We cannot allow this to happen. A threat to one practice is a threat to all practices’.

Unite the Union have pledged to help local campaigners in East London, Newham included with resources to fight against the imposition of the cuts to the Minimum Practice Income Guarantee (MPIG).  Last week (Thursday 5 June started and led by the Jubilee Practice) saw a March of GP’s, patients, staff and Borough residents in Tower Hamlets take their major concerns on the impact of these cuts on their local surgeries under the banner of “Save Our Surgeries”.  There are surgeries within Newham which are affected by the cuts made in this respect and are now possibly in the position of becoming financially unviable in the very near future.

This cut is currently affecting surgeries in Tower Hamlets, Hackney and Newham and as all three boroughs are densely populated with higher numbers of younger people the cuts in these boroughs are even more severe as monies are being diverted to areas where the proportion of older people is greater (conversely these tend to be more affluent areas).

I am working with a team dedicated to work with groups within Newham as a resource made available from Unite the Union to support this important and worthwhile campaign to help connect the various groups within the community to come together to mobilise around the fight to keep the NHS within the Public Sector as “Our NHS”.

I have attached to this email a leaflet and petition and invite you to support this campaign by circulating the information and discussing at the appropriate forums using your contacts and networks to get this very important campaign information out;.  An organised March is the main focus on the 66th Birthday of the NHS on 5 July starting at Stratford Station, to have signed Petitions ready to hand to the Minister of State for Health, Jeremy Hunt.

Your help and co-operation will be greatly appreciated and I look forward to hearing and or meeting with you initially to arrange picking up completed petitions by Friday 27 June.