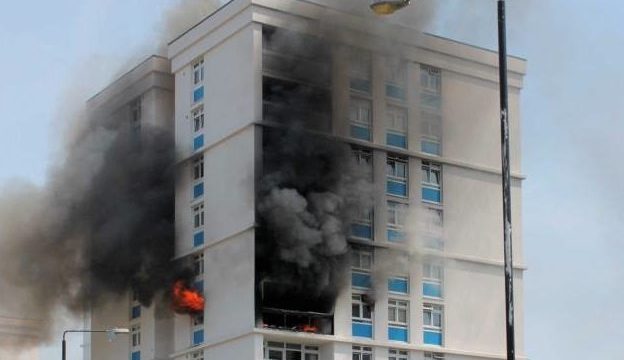 Last weekend a fire ripped through a tower block in Bow.

This week the London Mayor confirmed the planned closure of Bow Fire Station in October.

12 fire engines attended the incident, the first of which to attend were Bow Fire Station’s two appliances, both of which arrived within 5 minutes of the first 999 calls made.  The next 2 fire appliances to arrive came from Stratford and Poplar which arrived 2.5 and 4.5 minutes later.   And this was on a Sunday when traffic is relatively light.

In this kind of incident minutes save lives.  This fact was stressed by local residents and local fireman at the Mayor’s consultation at Queen Mary’s College in May, where his representatives were unable (or unwilling) to give a response times for Bow in the advent of the proposed closure of its fire station.  The consultation was condemned as a sham by local residents. See earlier post.

Hanna Sheen who lives in the affected block commented on Facebook:

Approximately 200 people were evacuated from the high rise block with 9 people being assisted by Fire Fighters, who were also treated on scene by the London Ambulance Service for smoke inhalation. These included 1 baby and 3 elderly adults.

The importance of a quick strike in this type of incident cannot be over stated. Bow Fire Station has 64 buildings classed by the London Fire Brigade as high rise on its ground.

Under the plans Bow will lose both its fire station and its police station in a move which will leave the area reliant on services in further afield areas of the borough.

This decision will hit the area especially hard as many of the Borough’s remaining tower blocks are in Bow and any increase in response times to fires in these blocks will undoubtedly put lives at risk.