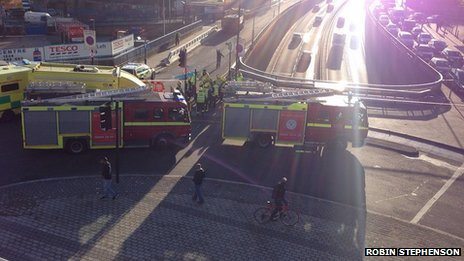 A cyclist has been killed today in a crash with a lorry at Bow Roundabout – the third cyclist to die at the Roundabout in two years, with the crash taking place 10m away from flowers left for another cyclist who died.  And the fourth bike rider to die on the capital’s roads in eight days. 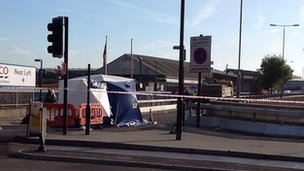 Police cordoned off the scene of the crash.

The other cyclists, Brian Dorling, 58, and Svitlana Tereschenko, 34,  were both killed on the painted blue Cycle Superhighway 2 (CS2) at Bow Roundabout.

Twelve cyclists have died on London’s roads so far this year, compared with 14 in 2012, according to Transport for London.

Police are appealing for witnesses to Wednesday’s collisions.

The London Assembly Green Part member Darren Johnson said the London mayor, Boris Johnson, was “in complete denial” over both the dangers of cycling in London, “and his personal responsibility” for making it safer.

“[Boris Johnson’s] repeated talk of our roads getting safer does not match the reality, especially when there is no obvious plan or timetable for action,” said Johnson.

“The mayor must dump his damaging policy of smoothing traffic flow, which puts the needs of motorists before safety, deliver segregated cycle lanes on key routes and work with boroughs to roll out 20mph speed limits.”

The mayor announced last week that he intended to expand the number of protected cycle lanes in the capital following a series of road deaths and criticism from a coroner that existing lanes give cyclists a false sense of security.

Johnson acknowledged that the existing network – launched in 2010 and mainly marked by just blue paint – needed improvement after a spate of accidents in which riders have been crushed by lorries.

Two weeks earlier, coroner Mary Hassall ordered Johnson and Transport for London to explain how they planned to make the system safer after conducting inquests into the deaths of two cyclists along the east-west cycle superhighway 2 (CS2), both crushed by lorries. Johnson said he would “take account of any comments and criticisms”.

In response to Wednesday morning’s fatality in Bow, Boris Johnson said: “Any death on London’s roads is a tragedy and my thoughts are with the families and friends of the cyclists who have lost their lives. In the past decade, the number of cyclists in the capital has almost trebled and it is absolutely vital that we continue to invest huge sums of money into making cycling infrastructure as safe as possible.

“I’ve committed almost £1bn to doing just that, with major improvements being made to junctions and superhighways across London and plans to ensure HGVs not fitted with safety equipment will face charges. More work is under way and they are being done as quickly as possible. This is an absolute priority for me, my team and TfL.”