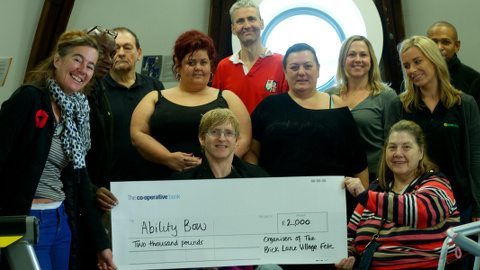 The cheque was handed over to Director of Ability Bow Victoria Kent, in a ceremony at their premises  in St Paul’s Church, St Stephen’s Road, yesterday.

The donation was funded by profits from the Brick Lane Village Fete and Art Auction, a tongue-in-cheek take on the Olde-Worlde English village fete, that was held in July and organised by McGuigan. 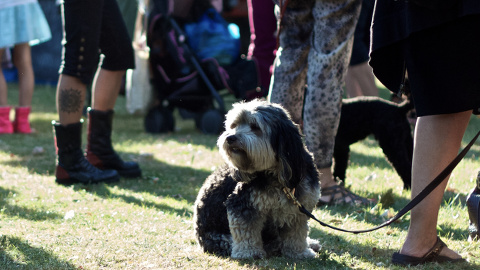 “Things like the Ability Bow’s gym are outstanding,” said McGuigan, who lived in Bethnal Green for 20 years before moving into sheltered housing this year.

McGuigan added: “It is just paramount that this place stays open. The organisation is small but its given value is immeasurable.”

Ability Bow, which provides personal exercise programmes for stroke victims and sufferers of Multiple Sclerosis, Parkinson’s, diabetes and extreme arthritis diseases, was threatened with closure last year after the NHS Primary Care Trust eneded their contract with the charity.

This left Ability Bow facing a £100,000 deficit, and despite being awarded £30,000 of funding from Tower Hamlets public health, the organisation has had to make cuts to staff, and is “constantly fire-fighting” against financial difficulties.

Victoria Kent, the Director of Ability Bow, said: “It is really important to raise more money through events like the Village Fete. We help people make such huge gains physically and mentally. People are walking again, they are going back to work, they are relying less on family and friends to get them through the day – which really has such an enormous impact on people’s day to day lives.”

Chris McGuigan, also known as Chris Mc Muck, established himself in the nineties as a manager for venues in Shoreditch such as 333, Vibe Bar and the Old Truman Brewery before he was diagnosed with MS in 2005.

He said he hopes to make the fete an annual event to “fly the flag for people of disability.”

Art suppliers Cowlin and Wilcox sponsored this year’s event, but the organisers are inviting any individuals or organisations that would like to support future events to contact them via Facebook.