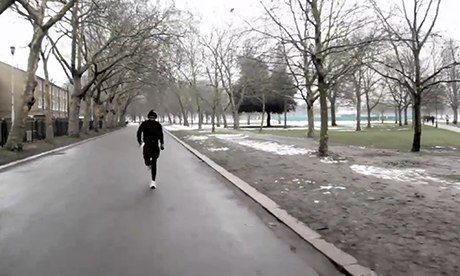 The Roman Road website  brought the short film The Runners to our attention.  Shot a year ago in Victoria Park it asks intimate questions of the runners as they pound the tarmac in the Park. With their guards dropped by the effort of running, the runners offer revealing insights into their lives, providing a varied and compelling narrative to those running figures we see in the Park.

The Runners went went viral in 2014 and gleaned a number of festival nominations and prizes.

The short film is directed by Matan Rochlitz and Ivo Gormley and produced by Banyak Films, and is supported by London Legacy Development Corporation and GoodGym. You can join a GoodGym, and get fit by doing good at www.goodgym.org The directors tell the story of how they did and why they did it:

Who are you?” panted the stranger running towards me. It was 6.30 on a crisp winter morning in Victoria Park in East London and I was sitting on a plastic stool being pulled backwards by a bicycle.

We were trying to understand what goes on in the minds of runners as they charge through the streets. What does it do to them and what can we find out about ourselves by interrupting them at this moment of vulnerability and clarity?

Film making is an extraordinary opportunity to ask people questions that you can’t ask at any other time. When you have the camera there, you are asking questions on behalf of anyone who might see it. In a way you have the public on your shoulder. The problem though is that it’s always on your terms, your interviewee is stuck on a chair in front of you; they can’t escape, they can’t move.

My friend and collaborator Matan Rochlitz had the idea that people might be more open if they were asked questions while running. They’d be distracted; perhaps you could ask about things that you couldn’t otherwise. Perhaps it would be a different way of asking some big existential questions.

Technically it was not that simple. Running and filming is not an option. Filming from a car wouldn’t allow us to film the parks and canals where runners congregate. The solution was a bicycle trailer on which we installed a plastic stool. The plan was that we’d take turns to cycle and film.

For sound, we made an extension arm from the camera which we gaffer-taped to a long directional microphone. The contraption looked like a fluffy rocket launcher. We started practicing our speed: sidling up to people and trying to maintain a similar pace. We were nervous. After a couple of early rejections (“No sorry.” and, “Erm I’d rather not, thanks.”) Rochlitz made contact with man running aggressively through the autumn leaves with his headphones on. The conversation started with “Why are you running today?” and quickly led to the story of his father, for whom he was running the marathon, and his dementia

The honesty and clarity with which the stranger expressed his love for his father, opening his arms wide as he ran, was humbling. He looked at us without questioning where we were from, or why we were interested. He just told us how he felt. In a situation in which he might otherwise be vulnerable and cornered, he was strong and clear.

We spent another seven minutes with him and he eventually left us, shouting his email address to us and running out of the park across grass. He was the third person we’d tried to talk to. We breathed a sigh of relief, feeling that this might actually work.

This interview set the tone – we’d generally start with a question about why the person was there, and try to take the conversation to something deeper. We realised early on that we’d only really get 10 minutes with each person before their route took them out of the park. We needed a smooth surface to keep the camerawork smooth so we settled on loops of the wide path that skirts the edges of the park. This gave the interviewees a lot of control: they could leave at any time.

As we gained confidence we started to be able to delve deeper. We heard about people running with heads filled with the potential of love, the worries of knowing what to do next, the moment of realising that you won’t have children, about escaping depression, about how the world was created by god, and planning to have more sex.

They opened up to us, again and again. Less and less, would they reject our requests for a conversation. In the meanwhile the seasons were rolling by; we kept going during the winter and the summer brought new waves of enthusiasts.

After each trip we found ourselves exhausted but increasingly inspired. I became quite envious of this state of mind and the focus that the runners expressed. It made me excited about being human and about their sense of peace and understanding of the present. It made me want to be part of it.

Many of the runners gave us their advice before we parted company. At the end of a long day of pedaling around the park, I had a conversation with a woman who told me about her regretting about not having had children and how it was now too late. Having discussed its pros and cons, she said with a twinkle in her eye, “Take care of the present, because it’s all you’ve got.” We smiled at each other and she ran off.

These questions (Are you in love? Who do you care about most? What do you want to do with your life?) are hard to ask and are not often answered sincerely. Through their steps, their breaths and their focus, runners can answer them.

For further information about the film and the directors visit The Runners Facebook page.