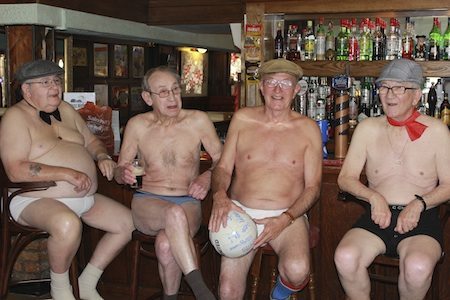 The Geezers acted out their own version of the  Calendar Boys last week at The Eleanor Arms on Old Ford Road.  Artist Louse Gridley worked with the boys to create their own Calendar for 2016.

Posing in the nude with their rude bits discreetly hidden by the apparatus of pub games, each Geezer posed for their chosen month.  Our picture shows Charlie, Ted, Ray and Duggie standing by to have their picture taken.

Louise is currently working on producing the calendar.  She commented:  I was so impressed with the commitment and enthusiasm shown by the Geezers – they far excelled my expectations. They were complete sports and all took the occasion in their stride, despite the nature of my crazy request! We had such laugh doing the shoot – and believe it or not, it all went like clockwork! The idea behind the shoot was to celebrate some of the traditional pub actives that have been enjoyed by many generations and are sadly being lost, due to the declining pub presence. Prior to the shoot, I’d already worked out which Geezer might be doing which activity so this helped with the logistics of the afternoon.
The project  follows her previous work with the Geezers which resulted in the very successful  painting The Last Supper which was displayed at the  Artcatchers Misbehaviour Show at the Mile End Pavilion in February.

Louise went on to say:  These particular images are remaining as photos in the calendar, but I have more painting material up my sleeve! I intend to pull something else out of the bag for the Geezer exhibition we are planning for next year.

The Calendar Boys are coming.  Watch this space!