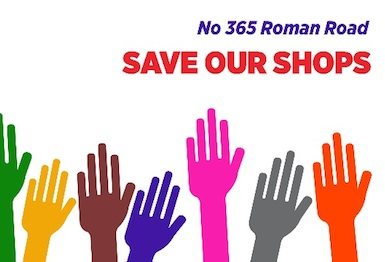 Another shop on the Roman is under threat.  The Roman Road Team are fighting to keep the street a vital retail centre and would like your support.  Here’s their letter and petition to sign:

and yet another little threat to the future of our amazing high street pops up. We have to constantly battle against our shop units being turned into take-aways, offices and flats – the more shop spaces we lose, the harder it gets for the Roman to be the thriving retail hub we all want. Good businesses really struggle to find spaces to let on the Roman Road. Many of you recently helped STOP

a shop being turned into a take-away. Now we need your support again to stop 365 Roman Road losing much of its shop space to flats. The fantastic Anchor + Hope right next door shows how successful a shop can be when given the space – please send the letter below NOW to make sure that another great shop can open in 365. Please email the below, adding in YOUR NAME

and address at the bottom, to:piotr.lanoszka@towerhamlets.gov.uk cc: dr.developmentcontrol@towerhamlets.gov.uk Dear Piotr I wish to OBJECT to application PA/14/01394 regarding 365 Roman Road. The application, if granted, would result in the loss of over half of the available A1 retail floorspace at the unit, reducing the unit in both width (as the access corridor to the rear residential would be widened) and depth (from the full depth of the building currently to less than half in the proposal). I believe that the reduction of the retail unit to this size would in all probability make it unviable for most retail use. Where similar residential conversions have been permitted elsewhere on the Roman Road, the resulting retail units have been too small to let and have either been left empty or granted change of use. By contrast, the full retail unit directly next door to 365, at 363, is now occupied by a successful new retail business, demonstrating the COMMERCIAL

viability of the premises if left in its current size.    The Council’s own Core Strategy identifies Roman Road as one of the Borough’s DISTRICT

Centres and sets out an ambition to enhance these with a wide range of shops.   It identifies, at SP01 4b, the need as a priority to deliver a net increase of 17,700 sq m of additional retail floorspace across five District Centres, including Roman Road. This loss of retail floorspace would not therefore be in conformity with the Council’s core strategy. For these reasons, and because I want the Roman Road to be a succesful, thriving high street, I request that you REFUSE this application.name address

you and don’t miss our next newsletter with full coverage of last week’s Roman Road Festival.Roman Road Town TeamPS Follow us at www.TWITTER