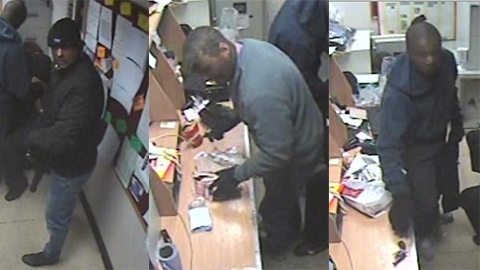 Police are appealing for public help in the hope of identifying three men who robbed a Tower Hamlets supermarket with a gun and a metal pole.

The men entered Iceland on Roman Road shortly after the store closed at 8pm on Friday March 14 brandishing their weapons.

After threatening three members of staff they left with a significant quantity of cash.

They also forcibly searched a young female member of staff and stole her phone.

It is believed that the three men made their way into the store using a ladder from anadjacent building site, the same route they used to escape the scene.

Detectives from the Flying Squad, a branch of the Metropolitan Police Service, which deals with prevention and investigation of serious armed crime, are now using CCTV footage to appeal for the public’s help.

They are asking anyone who noticed anything suspicious around the store or the adjacent building site to contact them.

Detective Sergeant Andrew McGuire said: “These men went to extraordinary lengths to enter the premises and it is likely they undertook some sort of reconnaissance beforehand.

“Once inside they completely terrorised two young members of staff by shouting threats at them and waving a handgun. They were frozen by fear and understandably have been left traumatised by the experience. Iceland are providing all the necessary counselling and support to them at this time.”