You are invited to a public meeting in Bow West to discuss current policing and community safety issues with the Borough Police Commander and the Head of Safer Neighbourhoods in Tower Hamlets. 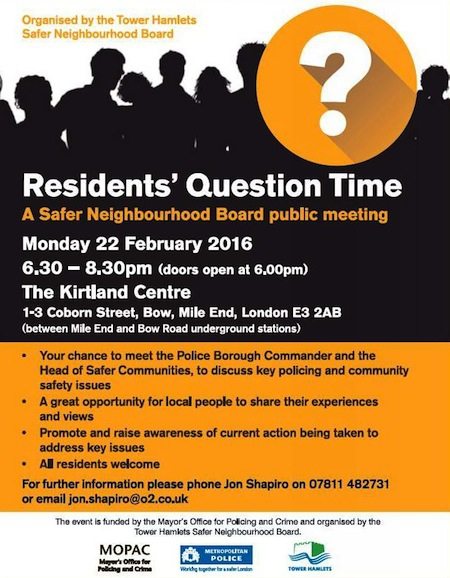 Residents may wish to attend the above meeting. In recent months MEOTRA has received numerous reports about ASB and suspected drug dealing in our area and the above meeting will provide an ideal opportunity to help shape policing priorities.

Drug dealing seems to be taking place on 4-5 of our streets in particular. Typically, deals follow the pattern: man waits on street; flash car drives up; window slides down; quick exchange of “stuff” and then they both go their separate ways.

Both PC Megan Bushell of Bow West Safer Neighbourhood Team and Cllr Josh Peck are aware of the issue and ask that we call 101 to report people waiting on street corners for deals. Give as much info as you can (time, car number plates, descriptions, etc).

Each week the police allocate a portion of their resources according to reported crime. So regular reports do make a difference.