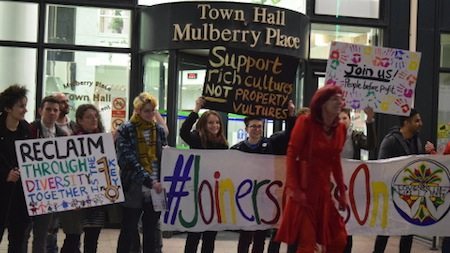 The club closed down last month after the council refused to renew the lease. The current owners are now looking to sell it to a property development company with the aim of turning it into flats.

Friends of the Joiners Arms, the group who organized the protest, recently won the venue “Asset to Community Value” (ACV) status, but the owners are calling on Tower Hamlets council to revoke the decision so their demolition plans can go ahead.

Amy Roberts, 29, Co-Chair of Friends of the Joiners Arms, described the club as a “safe haven” for the LGBT community. She said: “I was going to the Joiners for seven years before it closed. It was always a place where I felt safe. I could enjoy myself. I could be myself.”

“It celebrated diversity and I think that is something brilliant and something Tower Hamlets council should be supporting.”

If they can retain their ACV status, the Friends of the Joiners will be given six months to counter any bid made by a property developer. The long-term aim of the group is to reopen the Joiners as “London’s first cooperatively run queer community centre.”

Charlotte Gerada, 26, a campaigner for the Friends of the Joiners, said: “Without the AVC status, the owners could demolish the building tomorrow and there’s nothing the community can do about it.”