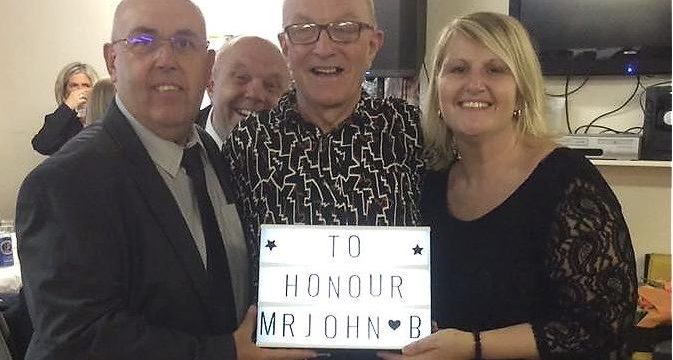 John Laurence Bevan was cremated at The City of London Cemetery, Manor Park at 12 noon on Saturday 7th October 2017.

John was a real East End character who was well loved in Bow, where he lived. At his cremation hundreds of people were in attendance: family, friends, neighbours, Geezers’ members, staff from Link Age Plus and Age UK East London, plus his friends from the Freemasons, of whom he was a member. 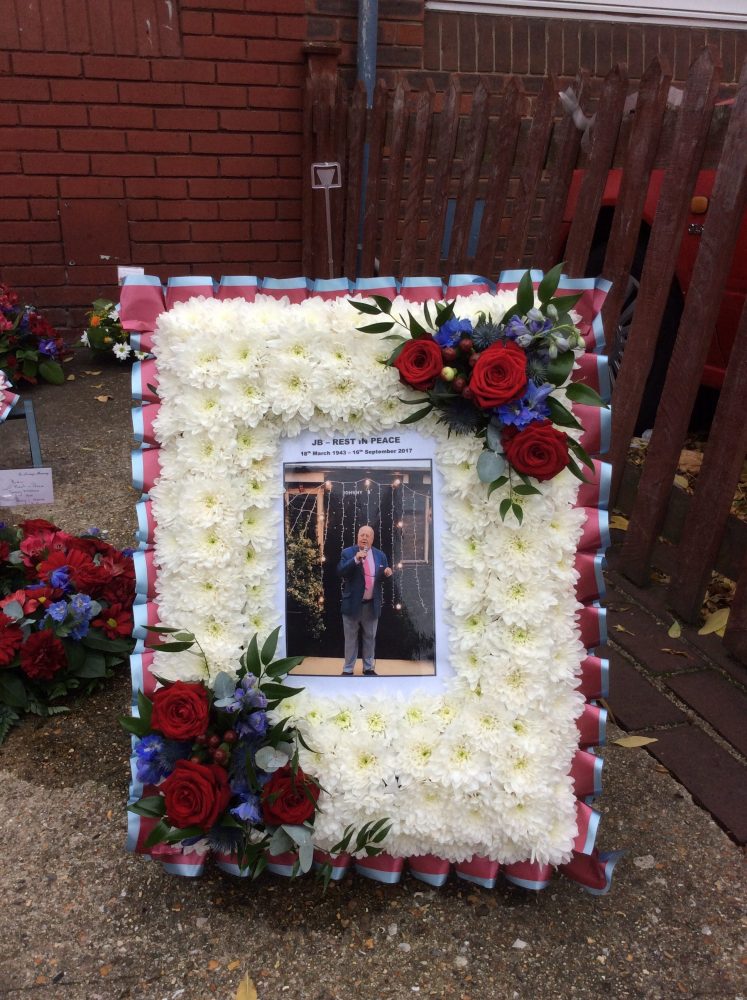 View all of the photos Angela Martin took of the floral tributes.

The coffin was carried by Ray Gipson and two of his sons Perry and John, all lifelong friends of John. They were accompanied by more pallbearers from the Freemasons to carry his coffin into the Chapel.

The City Of London South Chapel was packed to the rafters with every seat taken, with several dozen people also standing in the aisles. The coffin made its entry into the hall to the sound of ‘Jerusalem’ at John’s request.

The ceremony was conducted by Father Brian Ralph of St Barnabas Church on Grove Road, Bow, who knew John well.

The service along with the religious readings, had several eulogies by John’s niece Heidi and nephew Colin, a fellow Freemason Bro Norman Hodges, and lastly by John’s lifelong friend, Ray Gipson. John Bevan and Ray Gipson were founder members of The Geezers. There were very emotional talks all speaking about John’s joy of life, his amicable attitude and caring mentality, featuring his catchphrase ‘It’s Nice To Be Nice’.

In between the religious parts and the eulogies there music was played, singing being one of John’s real loves. The songs were ‘Moon River’ by Andy Williams, ‘Smile’ by Nat King Cole and a CD of John himself singing ‘My Way’.

The ceremony was very moving as all the people who spoke knew John well, and were relaying stories about his real personality and life.

Father Ralph said another of John’s catchphrases at the end of the ceremony, ‘There’s no pockets in coffins’ highlighting his pursuit of life.

Finally before the curtain closed, which was festooned with a masonic symbol, family and friends laid roses on top of the coffin.

After the Ceremony a hundred or more people made their way back to The Wake, at Butley Court Community Centre in Bow. View Angela Martin’s photos of the wake.

The Wake started officially at 2pm although a lot of people arrived earlier than this.

Ray Gipson said during his eulogy during the ceremony that John had always said that he did not want everyone to be sad at his passing, consequently at The Wake, there was a video playing on the TV Screen of John himself performing Standards by the likes of The Rat Pack.

Alcohol flowed freely with bar staff working their socks off and food was very well provided. The staff were presented with flowers afterwards. as a thank you for their great service. The cake was cut in slices and plates were handed out around the hall.

During the Wake, after John Bevan’s video finished, singer James Dyer (video by Angela Martin below) performed the style of music that John loved.

During the singer’s break between sets, several members of the congregation sang with backing Karaoke tracks, following John’s example.

There was also one section in the second half where West Ham United’s ‘I’m Forever Blowing Bubbles’ was loudly played to the gathered crowd. John was a Hammers fan. Almost everyone joined in, even though some were not West Ham fans.

The Wake included charity collections, including a raffle for a West Ham shirt of John’s which he’d got from Alvin Martin. That money was for lighting a candle at St Joseph’s Hospice in Hackney, which The Geezers in particular, always support.

The Wake music ended with ‘Auld Lang Syne’ with everyone gathered in the centre of the Community Hall for the customary arm holding dance.

Butley Court was booked until 7pm, and at this juncture the Wake moved across St Stephen’s Road to the nearby Albert Pub on the corner of Roman Road Market, where there was a night of dancing and singing. Barrie Stradling sang 4 songs in the pub.

The day, although a sad occasion, was a great celebration of John’s life. It was a very appropriate occasion, with the large turn out, and celebratory atmosphere, that John himself would have enjoyed. John was a well-respected man.

View photos of the floral tributes >>

View photos of the wake >>