With the appointment of a new Town Centre Manager for the Roman Road, and an ongoing consultation about its future, we thought it would be good to revisit the previous experience of a Regeneration spend on the Roman which was the subject of a petition to the full council on 27th November.  (The aftermath of which was the homophobic ‘attack’ on community activist and ex Lib Dem councillor, Nigel McCollum  – click here for our previous post on this subject)

To find out about the current consultation and take part in it,  click here for our post The Roman Road Needs You.

We have taken the following  about the petition at the full council meeting and the previous spend on the Roman  from a news post in EastLondonLines:

Roman Road residents are calling for an inquiry after £140,000 of public money was spent on the “shoddy” refurbishment of seven local shop fronts.

Bow resident Steven Barthram, 47, questioned the spending, which he said did not provide “value for money.” Figures reveal that of over 100 shops in the Roman Road area, just seven businesses received money for shop front renewal, with one business alone receiving over £41,000 towards development work.

One business, a shoe shop called Impulse, underwent a £24,000 overhaul but was left without disabled access and required re-plastering just two years on.

Up to £5,479 was spent on architects for the shop fronts and a total of £4,500 was spent on quantity surveyor costs for relatively minor development work.

“The quality of the refurbishment work was appalling,” said McCollum.

“It was done so badly that last week they’ve started to re-plaster the whole of the Impulse shop front.” 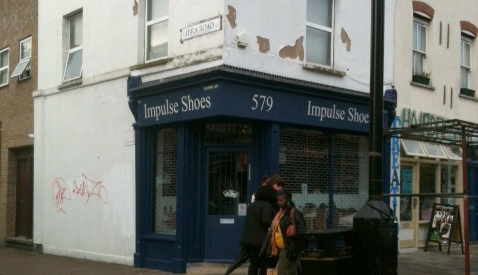 “The committee overseeing the 2010 investment should have used this money to carry out cosmetic regeneration – repainting lamp posts, restoring hanging baskets, fixing pot holes and making the area safer for mobility scooter and wheelchair users – they should have given the whole area a facelift, not just five shops [within the market].”

McCollum also said that new trees that had been planted along the road were disrupting the paving and were creating further hazards for wheelchair users such as Barthram.

Marc Francis, the Labour councillor for Bow East, was a member of the Roman Road regeneration steering committee.

He said: “There was a lot of money invested into the fabric of Roman Road and Bow, and people can judge whether that was money spent wisely or not, but the changes made are there for people to see.”

“As a councillor and as a steering group member, we didn’t authorise any individual spending,” he said, adding that: “Council officers oversaw the tendering process by which the consultants were appointed.”

“We thought around £10,000 would be going towards each shop for each shop front. I am disappointed that only half a dozen received funding, and I think that the money would have been better shared around.”

“If LBTH repeats that specific scheme again in future, I would want to see a limit for each shop given a grant”

In addition to the shop front renewal, Barthram challenged the spending of £120,000 on business support, especially as he alleges that many traders did not receive any training.

Francis assured that training programmes for business skills, visual merchandising, and business promotion had taken place, but admitted that “the council was quite reliant on external consultants” and “could have got a little more value for money around that expenditure.”

Prior to recent development, the last time Roman Road underwent serious regeneration was in 1993, when it was fitted with new shop fronts, pavements and road surfacing, new street lights and street furniture, new arches and decorative hanging baskets.