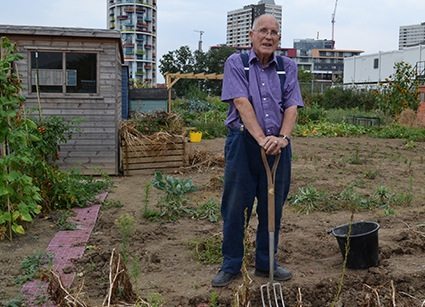 John was one of the allotment holders belonging to The Manor Gardening Society who was forced to leave their beloved Bully Fen base in 2007 to make way for the Olympic Park.  He has just harvested his first crop of vegetables from the Society’s new allotments in Pudding Mill, to where they were finally located early this year, after the London Legacy Development Corporation (LLDC)  reneged on its promises to deliver replacement allotments in the Olympic Park by December 2014.

87 year old John Day is a real community person, he’s not only one of the oldest members of the Gardening society, he is a founder member of the Geezers and a committee member, and is also an active contributor to his local church, St Pauls in St Stephens Road, E3.  He is one of the Geezers featured in their award winning film Bow: Then and Now made with the boys of Bow School.

For a full report on all the allotment shenanigans  pre- and post- the Olympic Games read this month’s Hackney Citizen.