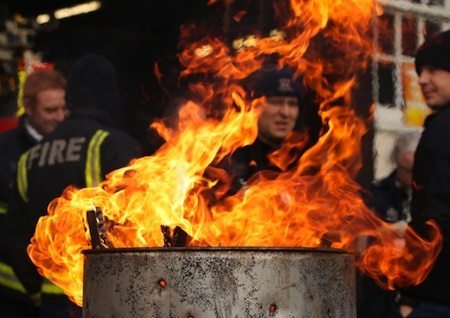 London firefighters began a 24-hour strike today in an on-going dispute over pensions.

This is very worrying for the residents of Bow who despite a vocal campaign last year lost their fire station in the latest round of cuts to the  Fire Service. Perhaps the Fire Service would be better sorting out the dispute rather than lecturing the general public on how to avoid fires.

Here is how it is reported in the East London Advertiser:

Members of the Fire Brigade Union (FBU) began their walk-out at 7am this morning.

There are 27 fire engines available across London meaning less serious incidents like fire alarms and bin fires will not be attended.

“As this is the first strike in three months there is a real concern that people will have forgotten about our arrangements and the incidents contingency crews will attend,” he said.

“Keep a closer eye on your cooking, make sure cigarettes are properly extinguished and never leave candles unsupervised.

“I’d particularly like Londoners to look out for vulnerable residents especially those with mobility issues.”

The firefighters are striking after the government guaranteed that firefighters aged 55, who failed a fitness test, would receive a full pension or a redeployed role.

But the FBU claims that when they asked all fire authorities if they would implement this, many stated they would not.

FBU general secretary Matt Wrack said: “Government ministers have ignored three written requests in the last few weeks by the union to meet to try to resolve this dispute.

“Government ministers are quick to call this union ‘militant’ and yet it’s them who still refuse to talk to us when we remain ready to meet and negotiate at any time.”

A Department for Communities and Local Government spokesman said: “All fire and rescue authorities have robust and well tested strike contingency plans in place that include back up support if needed.

“Strike action is unnecessary and appears to be over a point which is a vast improvement on the 2006 scheme which required firefighters to work to 60 with no protection.”