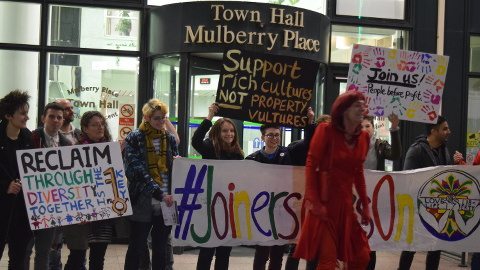 Good to see that it is possible to fight back against the dead hand of the developers.  And hope for other groups trying to defend their pubs and their communities.

Lets hope the LGBTQIA community can raise the funds to buy the Joiners Arms.

This is how it was reported by the East London Lines:

The Joiners Arms looks to continue to play its part in the London gay scene after Tower Hamlets Council announced it will uphold its status as a community asset.

The lesbian, gay, bisexual, transgender, queer, intersex and asexual (LGBTQIA) pub on Hackney Road closed in January and its current owners, Robobond LTD, had attempted to have the Asset of Community Value (ACV) status removed so it could be demolished and turned into flats.

The move sparked outcry from the LGBTQIA community and Friends of the Joiners Arms (FOTJA) launched a campaign to save the building. Protests were held and an online petition garnered more than 1,250 signatures, while over 6,000 people liked the campaign Facebook page.

FOTJA also conducted a survey of 212 local residents, with 93 per cent of those asked believing the Joiners Arms furthered the social wellbeing of the community and 90 per cent saying they missed the pub being open.

However, the council’s decision means the venue is deemed to be of significant importance to the local community, providing some protection against future change of use, and gives campaigners the right to bid on the building if it goes up for sale.

“It seems to me that the Joiners Arms site could still have a non-ancillary use in the future (e.g. premises that sell alcohol) which furthers the social welfare or social interests of the community, much as the Joiners Arms has done in the past,” Jackie Odunoye, Tower Hamlet Council’s Service Head for Strategy Regeneration and Sustainability, wrote in a letter to FOTJA.

“I consider it realistic to think that there can continue to be an on-going non-ancillary community use for the site which furthers the social well-being or social interests of the local community. For completeness, I think that such non-ancillary use is realistic within the next five years.

“I consider the land meets the requirements of section 88(1) or 88(2) of the Localism Act 2011 and, accordingly, I consider that it is land of community value. On this basis I uphold the decision – the subject of review.”

Adam Price, treasurer of FOTJA, said the decision has provided a breath of fresh air and reenergised the campaign, with the aim now being to transform the pub into London’s only cooperatively owned LGBTQIA Community Centre with a late license bar. Although he has not heard anything about the building going up for sale yet, he is confident FOTJA will be able to raise the funds should the Joiners go on the market.

“We are cautiously optimistic,” Price said. “In terms of fundraising, we would six months to do it, but that is being extended to nine months, which is a bonus. We are all confident that we can use our abilities and outreach to get people motivated to do that. Also part of the real appeal of that for us is that is throws six to nine months extra time into the developers plans, which often they don’t like. It’s an additional way for us to have a bit of leverage. The goal is to raise the funds and I think we would be able to do it.”