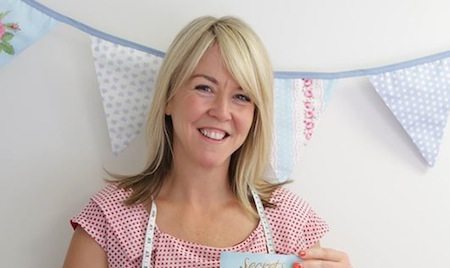 The Geezers recently received a visit to their Tuesday session from the author Kate Thompson .  She was well impressed and gave a glowing report on her Facebook page.  Kate is a journalist, author and ghostwriter.  Her debut novel, Secrets of the Singer Girls was published in March 2015, and the prequel, Secrets of the Sewing Bee, in March 2016.  She is currently working on two more novels.  Perhaps a Geezer will appear somewhere in their pages!

Here’s what she wrote about the Geezers after her visit:

Now I usually interview women as research for my books, but in the interests of equality, I thought I’d go and meet some of Bow’s finest boys, The Geezers. What an eye-opener! No tea served at their group, only beer, and I came away with a half-a dozen sausage rolls and a naked calendar. Chief Geezer, Ray Gipson, who set the group up, says: ‘We didn’t want sit with a load of women all gassing away, so we set up our own group. We’ve started a campaign to highlight the demise of the East End public house. Pubs used to be at the very heart of the community, with one on every street corner, a place where men used to get all suited and booted in their best rig-out, usually a sharp Maxi Cohen suit if you were lucky and go for a beer or two on a Sunday. You always knew everyone in there, it was smashing.’ Ray and the Geezers calculate they have lost 92 pubs in their local community of Bow, East London alone. ‘It’s not just about the booze,’ he explains. ‘We’re losing our heritage; the architecture, the traditional games and sports played in pubs and the local history that has been passed down through the generations.’
Ray and the Geezer’s memories evoke a long-lost world. ‘The streets and the bomb sites were our playgrounds,’ he remembers fondly, ‘with all the kids out playing High Jimmy Knacker, Gobs and Marbles. As we grew up, the games were replaced with girls. All the women dressed up to the nines, parading down the Roman like it was a catwalk, all the young bloods out eyeing them up. We were all poor, but that was alright, because everyone was in the same boat.’ The Geezer’s aren’t just about nostalgia. As well as their campaign to save the British boozer, they’ve won a Green Energy Award for their collaborative work in getting a turbine-driven lightwork for an Age UK roof. They are also dedicated to going into schools, sports and youth clubs (dressed) to spend time getting to know the young people that some older people might fear. ‘It’s about bridging the gap between young and old so none of us feels estranged from our communities,’ Ray explains. ‘We tell them about the East End we knew and loved, and we listen to the concerns they have about their life.’ I think Ray and his crew are an incredible example of how a community group can thrive. All round top Geezers. Good luck to them.