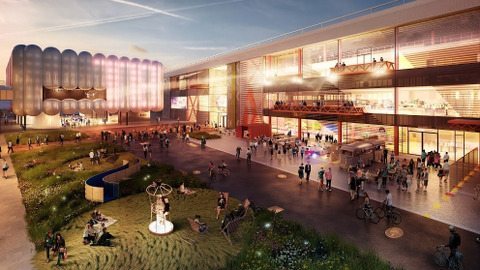 Plans to establish a world-leading creative and digital cluster at the former Olympic site, which will bring more than 2,000 new jobs to Hackney were approved yesterday by the London Legacy Development Corporation.

iCITY, the company tasked with regenerating the former media centres in Queen Elizabeth Park, also announced that the development, which will bring approximately 2,200 local jobs to Hackney, will be dubbed Here East.

The project offers over one million square feet of business space in the Olympic Park, overlooking the canal and parklands. The buildings have been designed to ensure that they have the flexibility to be adapted for a wide range of uses to maximise the potential of Here East.

While the majority of the former Press Centre will be filled with businesses, small units will be added on the ground floor to house retail outlets, artisan bakers and coffee shops. A rooftop terrace overlooking the Olympic Stadium will also be constructed.

Here East has already secured a number of tenants, including the production hub of BT Sport, a research and enterprise facility for Loughborough University and a new Tech City Apprenticeship Academy associated with Hackney Community College.

The chief executive of iCITY, Gavin Poole, said: “As well as creating thousands of jobs and training opportunities, Here East will provide state of the art infrastructure and capacity for the fastest growing sectors of the UK economy to continue their impressive expansion. Redevelopment of the buildings will begin in the summer.”

iCITY was first selected as the preferred bidder for the centres in April 2012 and more than £1 billion has been invested in the development so far.

The Mayor of Hackney, Jules Pipe, commented: “Hackney Council will be working with Here East and its tenants to ensure local residents benefit from the many job, apprenticeship and training opportunities and can begin building meaningful careers in the Queen Elizabeth Olympic Park.”

Here East is planning to showcase its plans to support London’s fast-growing creative and digital community at SXSW Festival in Austin, Texas this March. The US festival is the world’s largest interactive, music and film festival.