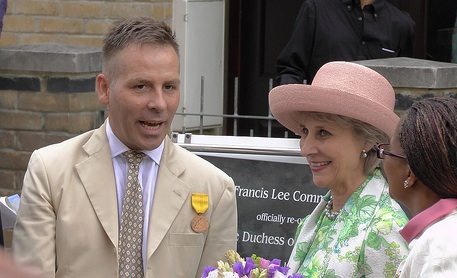 Posters appeared in areas near to his home in the Old Ford Road area of Bow.   They included a recently taken photograph at him at an event in Bow attended by the Duchess of Gloucester, and labeled him a ‘paedophile’.  They gave his address and phone numbers.  They also went into more details, all of which are false. They appeared late on Wednesday night, Thursday morning and again on Friday.  Sadly, more have been located this morning.

At Wednesday night’s Full Council meeting Nigel, who is openly gay, had delivered a petition on behalf of other residents in Bow regarding the Labour Group’s spending of over 1 million pounds on Roman Road Regeneration in 2010. The petition has asked the Mayor to launch an inquiry as not one local resident in Bow can see anywhere near 1 million pounds worth of regeneration in the Roman. Ironically, the meeting also heard a young people from a Tower Hamlets primary school condemning homophobia in the borough through their own petition to Council.

Whether there is any connection between Nigel’s petition on mismanagement of funds and the posters appearing hours later is yet to be proven but certainly the question is not the rights and wrongs of Nigel’s questions in the Chamber, but his right to express his opinion without fear of harassment and intimidation.

This happened in a week when two men were sentenced to life and four years respectively for horrifically beating a man to death and burning his body on a Bristol housing estate, on the completely unfounded rumour and suspicion that he was a paedophile.

“I am shocked that anyone of whatever political persuasion can invade another human’s right to privacy and put another human being’s life in mortal danger. The culprit needs to be caught and also needs help”

The Geezers, the older men’s group in the area who set up OurBow.Com, and who have worked with Nigel over the years, stand by him 100% and condemn the cowardly and at best stupid, or at worse evil actions of those responsible. The Police are treating it as a criminal act.

We urge anyone who has any information that might help identify the perpetrator(s) to get in touch with the Police.

The homophobic attack has been universally condemned by political figures of all persuasions in the Borough, though certain quarters even then seem unable to resist political point scoring.

Former Liberal Democrat Councillor Nigel McCollum has been the subject of anonymous smears and lies following his presentation of a petition to full council on Wednesday night. On Thursday morning, a number of posters were found in Bow making untrue and homophobic accusations against Mr McCollum. The police have launched an immediate investigation in to the production of the posters, which included a recent photograph of Nigel McCollum and his contact details. The posters were posted in public areas near to where Mr McCollum lives.

Liberal Democrat Councillor, Dr Stephanie Eaton said: “I am appalled to learn of the shocking and potentially criminal actions that have directly followed the public intervention of one of our borough’s respected residents, Nigel McCollum, in the full council meeting in the Town Hall on Wednesday night. Nigel McCollum had raised what he believes to have been the scandalous role of some local Labour councillors in wasting £1.6 million on developments in the Roman Road the previous evening at a meeting of the full council.

Nigel and I believe this to be a serious homophobic attack, and one that is aimed at stopping him from continuing his political activities. To post anonymous homophobic attacks about a resident and former councillor simply because he has raised legitimate questions about public spending is cowardly and unacceptable. It is an attack on all people involved in local politics, and one which has the potential to deter LGBT people from public service.

Nigel McCollum was a Tower Hamlets Councillor from 2002-2006 representing the ward of Bow East. He is a gay man in a long term relationship with his partner.

In 2005/2006 Nigel McCollum was subjected to anonymous hate mail making similar homophobic accusations. At the same time anonymous defamatory statements were also circulated to the Police, media and local politicians. The intimidation and harassment was a key reason in Nigel’s decision not to stand for re-election in 2006. As soon as this decision was announced, the harassment stopped.

The following is taken from Mayor Lutfur Rahman’s Blog:

I have been appalled to learn of the quite shocking and potentially criminal actions that have directly followed the public intervention of one of our borough’s prominent and respected residents, former Lib Dem councillor, Nigel McCollum, in the full council meeting in the Town Hall on Wednesday night.

I understand the police have launched an immediate investigation in to who is behind the posting of deeply offensive leaflets, picturing Nigel McCollum, and claiming that he is a ‘paedophile’. These posters have been posted in and around public areas near to where Nigel lives.

Fortunately, Nigel was alerted by concerned neighbours and friends upon waking on Thursday morning.

He had raised what he believes to have been the scandalous role of some local Labour councillors in wasting £1.6 million on developments in the Roman Road the previous evening at a meeting of the full council.

Both Lib Dem leader, Councillor Stephanie Eaton and I are urging the police to mount a full and thorough investigation. Both Stephanie and I wish to condemn what Nigel and ourselves believe to be a serious homophobic attack, and one that may well be politically charged. I have spoken to Nigel and offered him both our sympathy and our full support.

There can be no place for homophobia and hate in Tower Hamlets. Those who attempt to promulgate it must know that there will be consequences to their actions.

“I totally condemn these utterly atrocious attempts to smear a hard-working and respected former councillor. Whilst we may have our political differences with Nigel nobody should ever be subjected to this kind of abuse and we hope that those responsible will be swiftly bought to justice.

“To baselessly imply without any reason or cause that this is related to any exchange of opinions in the Council chamber does neither them, nor Nigel, justice. Now is not a time for politics, it is about finding those responsible and ensuring they face the consequences of their actions.”

“These attacks on Nigel McCollum are disgusting and unacceptable. I and the Labour Party stand firmly in support of him and against such cowardly homophobic behaviour. Anybody found to be behind these attacks should face the full force of the law.

“I and the Labour Party defend absolutely his right to challenge any public spending decisions under whatever administration. However, anybody attending the Council meeting will be aware that Labour members clarified that his claims were in our view ill-informed and misleading and were a rather clumsy political attack by one of the Mayor’s supporters.

“To link our disagreement with this attack against him is a slur. One of the reasons I am standing for Mayor is to challenge the nasty tendencies that often lurk in East End politics. This sort of conduct has no place in civilised society.”