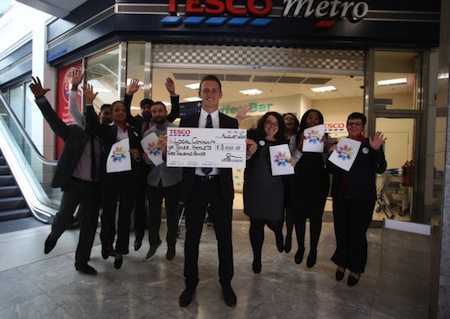 Tesco in association with the East London Advertiser are giving £3000 to Tower Hamlets’ charities to mark the opening of the new Tesco store in the Roman next month.  And you can vote for which charity should receive a £1000 slice of the prize pot.

So lets try and get some of that money into Bow by supporting a local charity.

The first stage is to nominate a charity, by September 3rd!  The Advertiser will then run a feature on the six most popular charities and their readers will vote for the three winners.

Commenting on the competition, Tesco’s Bow Metro store manager, Thomas Andrews, said: “There are so many fantastic charities in the area and they all do great work. To make sure we support the groups that most need a helping hand, we’re going to give the community and our customers the chance to choose which local groups they want to support.

“We’re really excited about launching the campaign and can’t wait to hear from local people.”

“The competition couldn’t be easier. People simply need to send us an email noting the one charity they believe most deserves to win £1,000 in prize money, in light of the contribution they make to the community.

“It’s important the people of east London have their say, which is why we wanted to make the competition as participatory as possible. The only stipulation is that it has to be a community group or charity that is based in or serves the borough of Tower Hamlets through a social goal and is not-for-profit.”

To nominate a cause for the Tesco Helping Hand grant email shekha.vyas@archant.co.uk by September 3 with ‘Tesco Competition’ in the subject line.