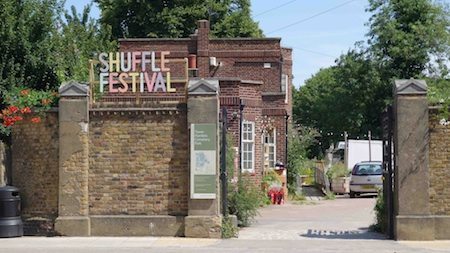 Shuffle are teaming up with the Friends of Tower Hamlets Cemetery Park to launch a crowd-funding campaign to restore and re-invent the Lodge. Together with Ken and co, who manage the park and all its residents dead and alive, we’ve hatched a plan and (as usual) it requires you Shufflers, Bat Enthusiasts, Cemetery Park Wonderers and Maestros of Mile End to come with us!

This year the Shuffle team made its home in the empty cemetery park lodge alongside artists and good people wrapping Christmas presents to give to children who don’t have much.

Following the invention of the internet it became clear people could do whatever they wanted if they all worked together. A couple of years later (probably more like 20) crowd-funding became a thing.

And now we have one damn good idea and a great website, Spacehive, that means you can build it with us. By pledging you are part of the project.

If you’ve been to Shuffle and enjoyed yourself, this is moment to set in stone that unique feeling that comes with making the most of unused spaces.

Happy Christmas and we hope to see you at The Lodge next year!