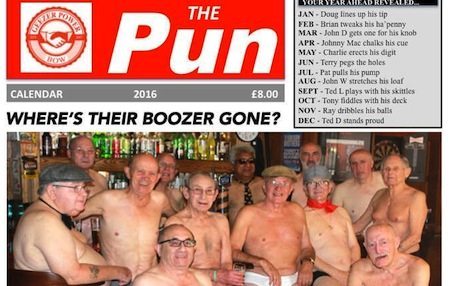 The PUN has arrived.  The Geezers bare-all Calendar for 2016 with its pictures of the boys in their almost altogethers, with its sly parody of Page Three and its support for the nation’s fast disappearing community pubs, has arrived from the printers.

Under lock and key until next monday’s launch at the Eleanor Arms in Old Ford Road, where the original photo shoot took place, they’ll be available thereafter from the website and other locations to be announced.

Get ready to place your orders!

All proceeds to go into supporting work with older people in East London.