The Geezers were the guest of local MP Jim Fitzpatrick for a trip around Parliament at the end of July.  Geezer Barrie Stradling tells the story of the day…

At around 10.15am on Tuesday 29th July 2014, most of The Geezers gathered inside Westminster tube station to go to our guided tour of the Palace of Westminster.  Several of The Geezers along with their partners, including Bonnie from The Bow Belles had travelled together from Bow Road tube whilst several other Geezers and some partners had travelled individually because some of us live in Limehouse/ Stepney/ Wapping so are nearer to different stations. 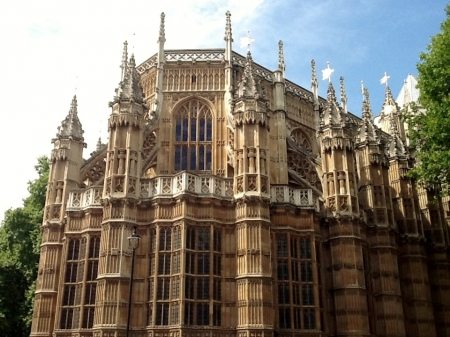 Those of us who had gathered made our way across the road to outside the Houses of Parliament where we met the remaining members of our party at around 10.30am, including photographer Georgia, some of whose group pictures accompany this article. 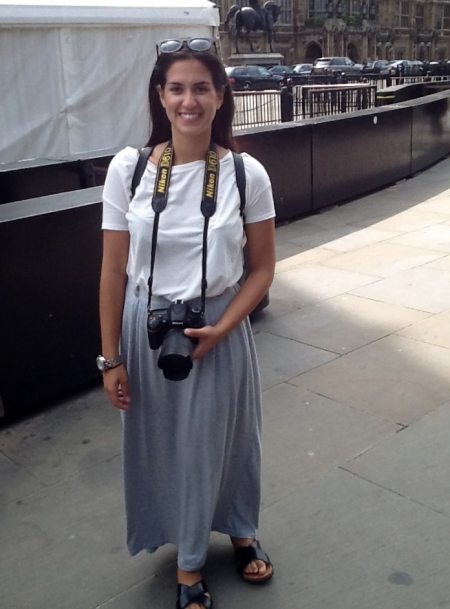 To gain entry in to the Palace of Westminster, we had to go through the security system, there were several armed police with Machine Guns walking around and several pavement based blockades presumably to stop vehicles ramming there way into Parliament.

Having walked nearer to the entrance we had to pass through a tented section where they checked that we had the relevant entry vouchers, we then made our way in to the next section where we had to wear neckpieces that were used to scan us, we then had to pass through what effectively was airport style security, where we had to take off any coats, belts and put anything electrical or metal in a basket that was then scanned.  We then individually had to walk through metal detectors, once we had been passed we were given a small token to wear to show that we had been security scanned. 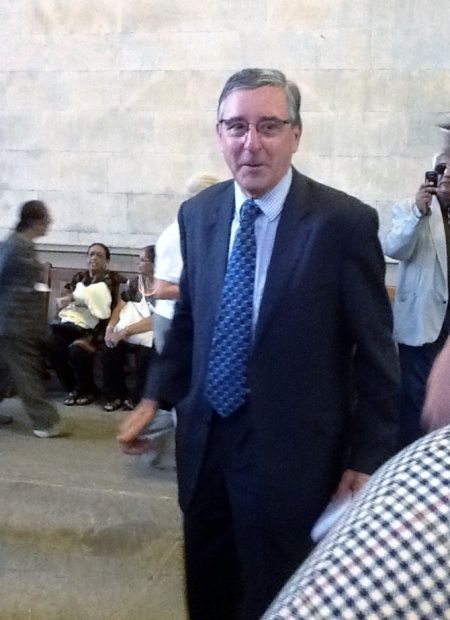 Having gained entry we walked in to the huge hall that is the Entrance to the Palace of Westminster, we were greeted by our guide for the guided tour, local East End based MP Jim Fitzpatrick, there were 15 in our party and we were also accompanied by an American photographer who knew the MP. 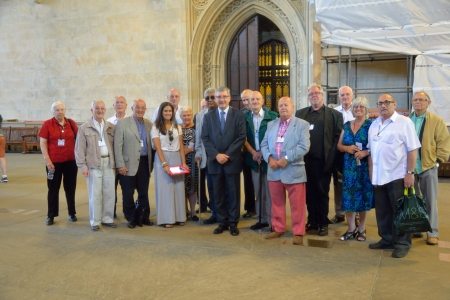 The entrance hall has a huge fireplace that must have been like standing in front of a furnace, although Jim Fitzpatrick explained that the place was so huge it was very hard to warm, within the entrance it also has several engraved plaques embedded in the stone, one of which being Nelson Mandela, highlighting who has spoken in this huge entrance hall, where they install seating etc.

To get into the Parliamentary sections we had to walk up 5 flights of stairs, to the higher level which was all on one flat surface.  It was a fairly arduous walk, one Geezer member Stuart, became faint and dizzy in the area before we entered the House of Lords, as he had found it too arduous.  Jim Fitzpatrick MP helped him as had The Geezers.  He called the Assistants over to help him, which they did, helping him get back to his feet as he had collapsed, and got him to a seat by the fan, so that he could get some air, he rested there and joined us later in the tour in the House of Commons where he was escorted by the Assistant who had helped him. Unfortunately he missed a fair chunk of the tour, but it was obviously his health that was the main priority. 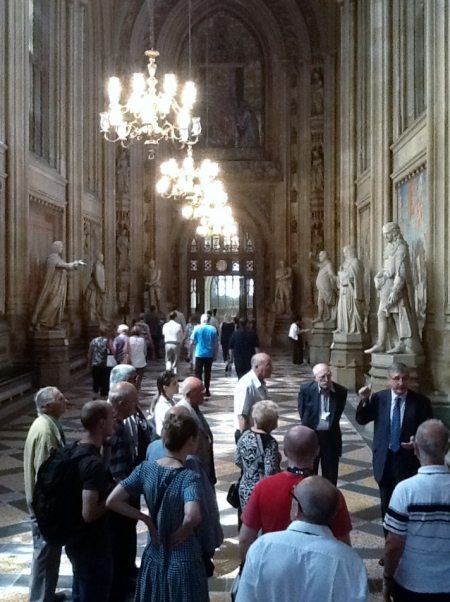 There were many parties being guided around the Palace of Westminster, which is called that by the way, because it was the Royal Palace until Henry the 8th decided to move his Palace to another destination, at which point he bequeathed it to the Lords and Politicians.

The other guides were conducted by staff of the MPs, not the MPs themselves To have a politician guide was far more preferable than having staff take the tour as he was able to pass on his own received knowledge to us.

During the tour Jim Fitzpatrick MP explained what all the historical significance within the Palace was, it was a very informative Tour, where we saw and learnt a lot.

It had been a very informative and enjoyable guided tour conducted by an MP local to us, which all The Geezers/ Bow Belle and their guests thoroughly enjoyed.

Things that we saw and learnt –

Victoria was only 4ft 10in tall and all the thrones within the building have a footstall in front of them this was so that no one could see how small Victoria was and thereby demean her power.

Queen Victoria is highly featured everywhere in the building with statues, portraits and the letter VR i.e. Victoria Regina is heavily featured in the architecture.

There is also a lot of focus on Henry 8th as I said because he gave the Palace over to Parliament to highlight this there are portraits, stained glass and other designs highlighting his 6 wives story and his formation of The Church of England when the then Pope refused to sanction his marrying his deceased Brother’s wife.

There were Charles 1 portraits and Statues pre Cromwell’s Civil War, there is a statue in the Entrance Hall that was damaged by a Suffragette who chained herself to it and they had to cut her chains thereby damaging the statue, on which you can still see the repaired damage on.

We saw Charles 1st Death Warrant that was signed by some Politicians and as a consequence of this at the edict of Charles 2nd, whenever a Royal is in the House, an MP is taken hostage to Buckingham Palace, where they are held until the Queen or King is released.

This is in case a Cromwell type situation arose again and the Royal was held hostage.

Jim Fitzpatrick MP said he himself had been the designated hostage on a couple of occasions, said he was nervous in case anything happened, he mentioned this to the guard boss, who consoled him by assuring him that they would kill him quick, so he had no need to worry!     I am not too sure how much of a consolation this was, but they had not shot him, which was good I suppose.

The Queen or King are not allowed in to The House Of Commons only The House Of Lords, where the MPs come to hear their speech, we saw the door that the Royals official Black Rod knocks on to gain entrance, and you can see the dents in the wood where the Black Rod has been struck over the years.

One thing that was humorous –  unless you were sitting nearby when it happened – was that the Speaker in The House of Commons has a commode as part of his chair, in years gone by this was surrounded by a curtain so that the Speaker could do the necessary on the commode in secret behind the pulled curtains, this was because in former times the Speaker could not leave the House to perform his ablutions because once he left the house was over.

Nowadays there is a newer chair that was supplied by the Australians, which does not have a curtain, however the Speaker now has assistances, who will stand in if the Speaker has a call of nature, be it number 1s, number 2s or reading the Racing Post to check out who was the 6 dog at Hackney, sorry an East End phrase for those wondering what the hell I was on about!   So that the House can continue.

For reference a lot of the furniture, The Dispatch Boxes where the PM and the Opposition Leader speak and keep their papers in and other items around where the PM talks were supplied by The Commonwealth countries Canada, India, New Zealand and the aforementioned Australians for example.

The Royals have their own personal dressing area, which we went through, it is very elaborately ordained.

The passageways to the two houses are also very ornately decorated and are colour coordinated the House of Commons the red seated arena, as opposed to the green seated House of Lords, outside in the hallway Hansard, which has reports on the days proceedings are bound in red or green to highlight where the report comes from.

What I found interesting was the massive amount of microphones that were all around both houses, which is used both for any TV coverage and for relaying the proceedings to the more doddery, sorry older members, particularly the deafer ones.  Jim Fitzpatrick MP told us that when members appeared on TV looking to be asleep or sloshed, they were really just listening to the earpieces intently with their eyes closed, believe that if you will!

Inside one of the passageways outside the Houses there are four statues two on each side that you walk through  – Winston Churchill, Clement Atlee, Lloyd George and Margaret Thatcher.  What we were told was that like the situation with Victoria’s short stature, Lloyd George, who is on the same side as Winston Churchill,  was put on an extra plinth  so that he and Winston Churchill were the same height, and the Welshmen was not seen as inferior as he was shorter than Churchill.

We found that the Divisions of the House Of Commons are divided into three alphabetical sections A – F, G – M and N – Z, this was because in olden days MPs would try to vote more than once.

That MPs who were ill but deemed to be fit enough to vote by nodding their heads were hospitalised in St Thomas’s Hospital over Westminster Bridge and were taken to the House by ambulance vote and then return to Hospital.

There are four sections in to the main area, which is designated to individual parts of Britain England, Wales, Northern Ireland and Scotland, which Scotsman Jim Fitzpatrick said is where the Restaurants and Bars were, he said naturally stereotypically the Bars had to be in the Scottish section!

Lots of phrases have there origin in the House of Commons –

It’s In The Bag = comes from a bag that they use for putting Parliamentary things in behind the Speakers chair.

Toe The Line = these are lines on the floor that are behind where the Dispatch Boxes either side that the PM and Leader of Opposition stand at the weekly Prime Ministers Questions, which the talkers cannot or must not cross.

Moving back to Palace of Westminster, what I found funny was that there are two huge paintings either side of a passageway between the two houses, one about Britain’s victory against the French at Waterloo and the other about Britain’s victory against the French at Trafalgar.  Why I found it funny was that this was the area where Charles De Gaulle post World War 2 came to speak to Parliament to thank Britain for their part helping the French rid their country of the German’s, Jim Fitzpatrick MP said that they had to cover these up when he was there to speak in case it offended the Frenchman!

I said what I would have done was make sure that De Gaulle travelled in to Waterloo Station, his convoy drove past Trafalgar Square to Parliament and they floodlit the two paintings where he spoke not covered them! Diplomacy has never been my strong point, sorry!

After the tour we re entered the Palace Entrance had some Photographs taken as you will see in this Blog, went in to the Cafeteria and had some refreshments before we left the building. 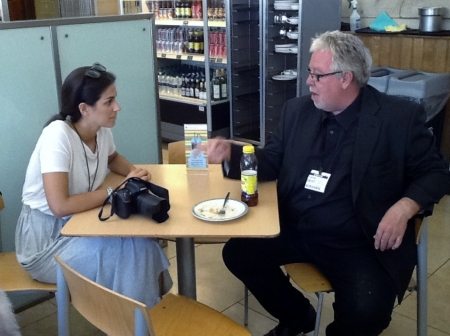 Barrie Stradling talks to Georgia the photographer in the cafe. 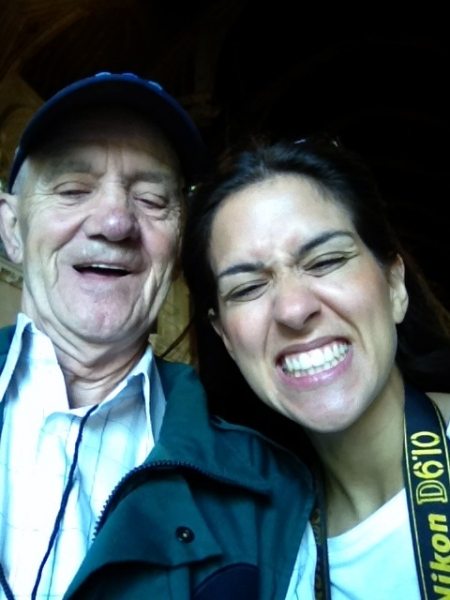