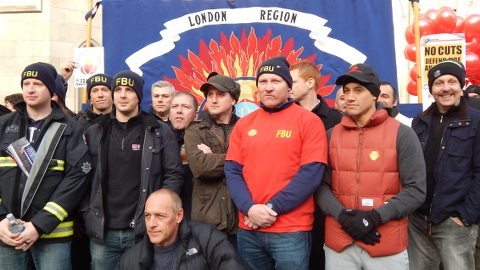 Firefighters protested at the steps of the High Court on Tuesday against cuts to London fire and rescue services, which are to be challenged in a judicial review. See our earlier posts about the fightback in Bow.

The boroughs of Tower Hamlets, Hackney, and Lewisham joined four neighbouring councils in a legal challenge against the cuts proposed by London Mayor Boris Johnson.

Neil Vertigans, crew manager at Bow Fire Station, said: “I’ve worked in Bow for sometime now, and it’s great to be part of the community and work for that community. You feel the people there are being let down more than us. It’s why we’re doing the job. Everybody joins the job because they enjoy helping people.”

Sam Hayward, Bow firefighter, agreed: “We’re not necessarily fighting for us, it’s more really for the people of Bow. Fighting for the public, that’s what today means to me.”

As Johnny Cash’s song “Ring of Fire” blared from a parked fire engine, Fire Brigades Union London secretary Paul Embery said: “We hope that the judge sees what everyone else in London can see: these cuts are dangerous and wrong. Even the London Fire Brigade admits there will be delays for four million people if these cuts go ahead, and when you’re trapped in a fire, seconds really do count.”

Embery added: “94 per cent of people in the public consultation opposed these cuts. It seems that only Boris Johnson and a handful of his supporters support the cuts.”

The cuts threaten to close 10 fire stations, and would also result in the loss of 14 fire appliances and 552 fire fighter posts. Three of the fire stations threatened with closure are Bow station in Tower Hamlets, Kingsland station in Hackney and Downham station in Lewisham.

The councils have sought the judicial review on the grounds that Johnson did not consider public consultation responses and failed to take into account the complex nature of fire risk in certain areas of inner London.

The councils also argue that the Mayor breached the Equality Act, by disregarding the heightened fire risk of certain groups with protected characteristics, like those with disabilities.

Islington council has lead the application on behalf of the seven councils.

The judicial review will be heard at the Royal Courts of Justice from today until Thursday. Embery said he hoped the judge would give his verdict by then, but that in reality he expected to wait for up to two weeks.

Mick Gibbs, watch manager at Kingsland Fire Station, has worked at the threatened station for 28 years. He said: “On one hand, the Greater London Authority are planning to build 25,000 new homes every year in London, and on the other hand, they want to cut the fire provision. As London is expanding, they’re reducing our fire power.”

He added: “The amount of money that we’re actually talking about to fund these stations is not a great amount in the grand scheme of the London plan.”

Mayor Johnson argues that the fire service cuts are needed to save £28.8 million and would not affect public safety. Councils participating in the legal battle claim the cuts do not take into account fire risk factors in the more densely populated and deprived areas of inner London.

Firefighters at the rally stressed that they are fighting the cuts on behalf of the communities they serve.

Embery remains optimistic about the future: “The campaign will go on as far as we’re concerned, until the day they send round people to lock up the stations and kick the firefighters out.

“We’re not going to relent in this campaign. We’re going to do everything we can until the very last minute.”