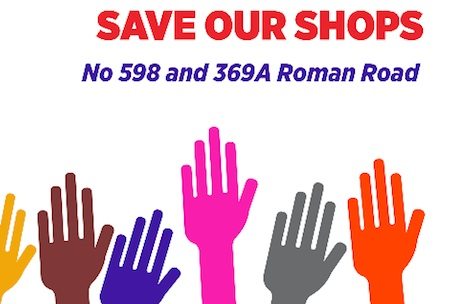 The Developers are at it again on the Roman.  Two more applications are being made to turn retail premises into flats.

With spiralling London House prices it may seem sensible to convert commercial premises into residential accommodation – after all, we all need somewhere to live!

But, please,  not at the expense of making Roman Road into a Ghost Town – a community needs its heart.

The Roman Road team are leading the fight back.  With your support two shops have been saved in recent months.

Fight these latest applications by emailing your objections to the council as set out in the latest request from the Roman Road Team.

After an amazing response to our plea last week to help save another threatened Roman Road shop, we wanted to let you know that you did it! Planners rejected the proposal to turn much of 365 Roman Road into a flat. That’s the second shop you’ve helped save in recent months.

Yet this week there are already two more applications to lose retail space at shops on the Roman to residential, so we need your help again. With so much money to be made on housing locally, developers are doing all they can to convert shops into flats. We’re all for places for people to live but people also need places to work, shop and socialise and we exist to protect the economic viability of the Roman Road.

Help us save these shops and send a message to developers that there are no easy pickings on our Roman Road.

The proposal at 598 Roman Road would result in an unacceptable loss of around 20% of the ground floor retail floorspace of the retail unit as well as loss of ancillary storage and servicing areas at rear.

The proposal at 369A Roman Road would result in an unacceptable loss of ground floor retail floorspace of the retail unit, whilst the addition of two bin stores, one within the main retail space itself, would be unsightly and impractical, would reduce window frontage onto the Roman Road and would result in an unacceptably narrow shop unit at its entrance.

Each of these proposals is likely to reduce the viability of these units for most retail uses and further reduce the availability of retail sites on the Roman Road East District Town Centre, which already has a lack of available shop units to let.

Furthermore, each of these proposals would, on their own, have an unacceptable detrimental impact on the vitality and viability of the designated Roman Road East District Town Centre and undermine the Council’s town centre hierarchy, contrary to the principles of the National Planning Policy Framework (2012), policy 2.15 of the London Plan (2011), policy SP01 of the Core Strategy (2010) and policy DM1 of the Managing Development Document (2013). These policies seek to safeguard and enhance the vitality and viability of town centres by protecting and promoting commercial uses, and place town centres at the heart of local communities. In particular, policy SP01(4) seeks to maintain, focus and increase the supply of retail floorspace in Roman Road and policy DM1(7) seeks to ensure adequate servicing arrangements as well as adequate depth and width of retail units.

As a result, I urge you to REJECT these two applications.

YOUR NAME
YOUR ADDRESS