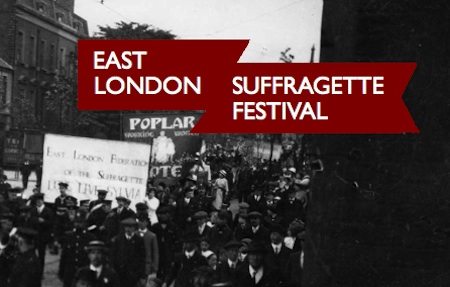 Sorry, we are a bit late with this posting about the Festival, but there’s still a lot you can do.

The Festival celebrates a 100 years since Sylvia Pankhurst split from the Women’s Political and Social Union (WPSU) to create her own independent group in Bow, called the East London Federation of Suffragettes. 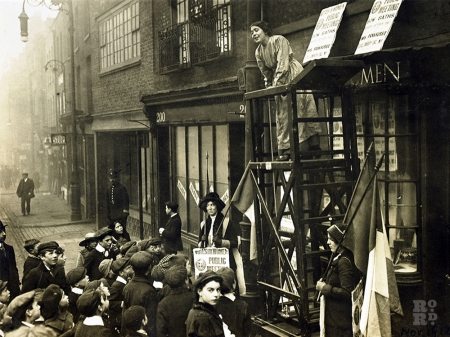 Tower Hamlets Community Housing are commemorating the centenary of the outbreak of the First World War by hosting an exhibition showing the faces and stories of many young people who lived or worked in Tower Hamlets when the war broke out, including the East London suffragettes.

See photos of the suffragettes’ activities in Bow and learn about their remarkable wartime work.

An exhibition of radical posters of women’s activism from various sources, including the See Red Women’s Workshop.

Minnie Lansbury (nee Glassman) was the child of Polish Jewish immigrants, who in her short life was a school teacher, suffragette, campaigner for the victims of war, communist and rebel councillor. She died aged only 32, weakened by a six-week prison spell as one of thirty councillors who refused to collect excessive rates in the impoverished London borough of Poplar.

Janine Booth, author of Guilty and Proud of it: Poplar’s Rebel Councillors and Guardians 1919-1925, tells the story of this remarkable woman, celebrating her memory and taking inspiration for present-day struggles.

Free day of talks, workshops and performance about history, equality, and east London at historic Toynbee Hall. Cake, jumble, stalls and activities for kids too! Take a look at our packed programme.

More of an almost afterparty (don’t miss our great events on Sunday 10 August!) but we hope you will join the festival team after our main event and raise a glass to the East London Federation of the Suffragettes with us.

Sisters, Rebels, Freedom Fighters: Walking in the footsteps of the East London Federation of Suffragettes  SOLD OUT

Join us on this history walk to find out who the East London Federation of Suffragettes were, what they believed in, how they won support for their ideas, and everything they achieved.

Join us for a special Sunday lunch at G. KELLY, Roman Road MARKET. For less than a fiver enjoy delicious pie and mash, a cup of tea or coffee, and three fascinating short talks about food in the East End:

An evening of extracts and shorts focussing on images of women’s struggle, political activism and filmmaking.

The first half of the programme presents extracts of films about women’s activism in east London and beyond. The second half will screen a series of short films made in the spirit of the Suffragettes.

A day of talks, stalls and refreshments to launch Tower Hamlets’ WWI commemoration.

Join us for a Sunday afternoon picnic in beautiful Meath Gardens. Learn about the history of the park (formerly Victoria Park Cemetery) and its creator Fanny Wilkinson – the first woman LANDSCAPE GARDENER in Britain!

Meet at the entrance arch on Bullard’s Place (map: https://goo.gl/maps/DYAbA) From there we’ll walk a short distance to a good picnic spot or an alternative indoor venue if it’s raining. Please bring a towel or blanket to sit on and food to share!