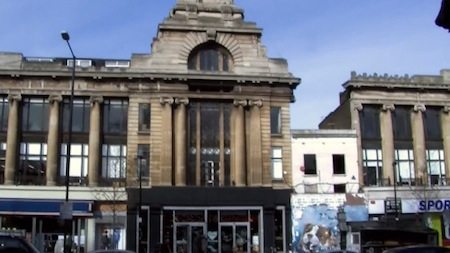 Another East End local landmark is under threat.  The beloved Spielgelhalter’s Jewellers on Mile End Road in Whitechapel is in danger of being demolished by the building’s owners, Resolution Property.

Its important to Bow, not only because it would have been familiar along with the Wickham Department Store to many local residents, but because it is symptomatic of the steady process of profit-led gentrification that is threatening to rip out the heart of the East End – its buildings, its communities and its people.  Last Saturday’s March for Housing on City Hall, the fights to save the Joiners  Arms and the Spotted Dog and the Geezers’ own Where’s my Boozer Gone campaign show that people are not prepared to go quietly.

After surviving the Depression and the Blitz, the former family-run jeweller’s, founded in 1828, is facing serious threats of being replaced with a modern glass atrium to provide access to the surrounding offices.

The Victorian Society is desperately trying to increase public awareness on the issue, urging people to sign a petition to force Tower Hamlets Council to locally list the building. David Collard, one of its strongest defendants told ELL: “It’s not [an example of] important architecture but it’s a very important story of non cooperation and not being bullied by big money.”

Despite pressures that began in 1920 for it to be removed, the modest, 19th Century shop sits splitting up an ostentatious Baroque building, Wickham’s Department Store, meant to be the “Harrods of East London”.

The tug-of-war for building permission began with the jeweller’s first owners The Spiegelhalters, German migrants who obstinately refused all offers to sell. This forced the Wickhams to build their grand construction around the little shop. Secretly hoping for the Spiegelhalters to change their minds, the Wickhams were left disappointed in the end.

Ian Nairn, one of Britain’s greatest topographical writers, said in 1966: “The result is one of the best visual jokes in London, a perennial triumph for the little man, the bloke who won’t conform. May he stay there till the Bomb falls.”

The closed shop is now facing some severe threats of demolition that the campaign to protect it is taking very seriously. A petition supported by the Twentieth Century Society has already gathered more than 2,000 signatures. “Enough to force the Tower Hamlets Council to seriously consider our request”, said Collard.

If Spielgelhalter’s were finally to be preserved, the council and the owners would have to plan a way to make the site suitable and secure for appropriate commercial use. “Time is running out” for the council to decide, Collard said, but as of yet, the David-and-Goliath battle continues.