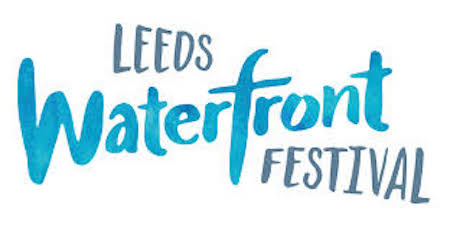 Geezer’s member Barrie Stradling gives his account of the trip:

The Active Energy Project had been invited to a fully paid trip to Leeds by people who were at the Three Mills Water Wheel Launch in London as they wanted to have a conference of like-minded people. Three Geezers went –  me, Ray Gipson and Ricky Ayliffe, along with Loraine Leeson,  Active Energy’s community artist and facilitator.

We left Bow and made our way to Kings Cross in a cab with Loraine Leeson, instigator of the Active Energy Project.  We boarded the Train at 9.35am and were in Leeds in just over a couple of hours.

The conference was titled Inspiring a Generation and organised by Trevor Roberts of Canal Connections.  The format of the day was as follows –

We met at Granary Wharf Hilton Hotel Dock, not far from Leeds station, at 12 noon where we boarded the Kirkstall Flyboat for a journey on the Leeds Canal, finishing in Knostrop, before turning around and heading back to Brewery Wharf.  We boarded the boat, our luggage was taken by the Captain of the boat and stored ashore.  On-board there was tea, coffee and a free bar, which strangely we avoided!

The tea/coffee began at 12.30pm, at 12.35pm we were addressed by the Lord Mayor of Leeds, Councillor Jane Dowson (The 124th Mayor of Leeds), who spoke to us about the purpose of the day, to show everyone the waterway network in Leeds potential, and why water was so important for young and old. 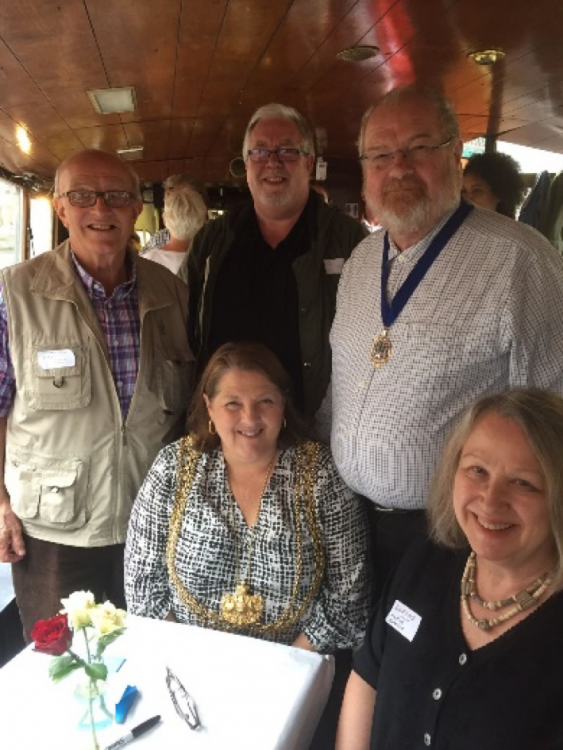 The Lord Mayor and her husband consort, with Ray, Barrie and Loraine. 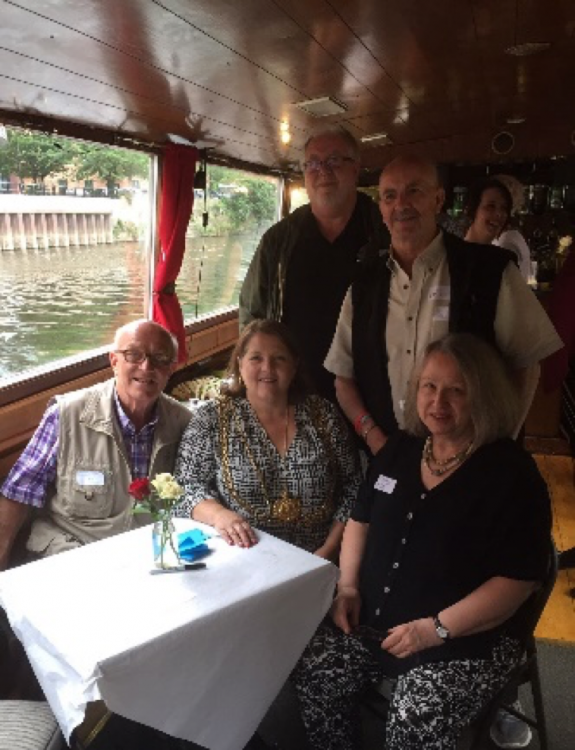 And this time with Ricky.

At 12.40pm Trevor Roberts of Canal Connections introduced everyone on board to the idea of Leeds wanting to be the Culture Capital, and the fact that there was a huge development going on along the Canal/ River Aire waterways. He explained how the Industrial Revolution developed via the canal network in Leeds and had a 250 year heritage. From a Londoner’s point of view it was different from the London Canal system in design.  He told us that the River Aire was also part of the system, the boat travelled along a very wide waterway.  He said that Leeds were endeavouring to be the City Of Culture in a short while.

At 1pm Rachel Unsworth of Cradle of Innovation talked about her project – the aim of which is to highlight innovators past and present and the impact that they could have on the future,

This was followed by a buffet Lunch and networking on board.  We were also encouraged to all write Post-It notes about what we thought regarding the Canal trip.

We reached Knostrop, our destination, turned around, and at 2pm we arrived at our disembarkation point, Brewery Wharf, where our hotel Jury’s Inn was located. We went ashore and headed to the hotel, booking in and storing our luggage behind the reception. We had three rooms, two singles and one double with twin beds all located on the 7th floor of this very swish hotel that had over 100 rooms.  We boarded lifts to the first floor where we were presenting, along with like-minded people, via PowerPoint, in a closed room that was like a Classroom.  In truth as we were on the waterway we were encouraged to give our thoughts of our new location ashore as well: to ascertain whether an open environment like the Canal Waterway was more conducive than being in a closed room like the meeting suite.

Trevor Roberts introduced the afternoon Seminar and we, as Active Energy, were the first on.

Ray Gipson started by explaining the purpose of The Geezers with Active Energy. 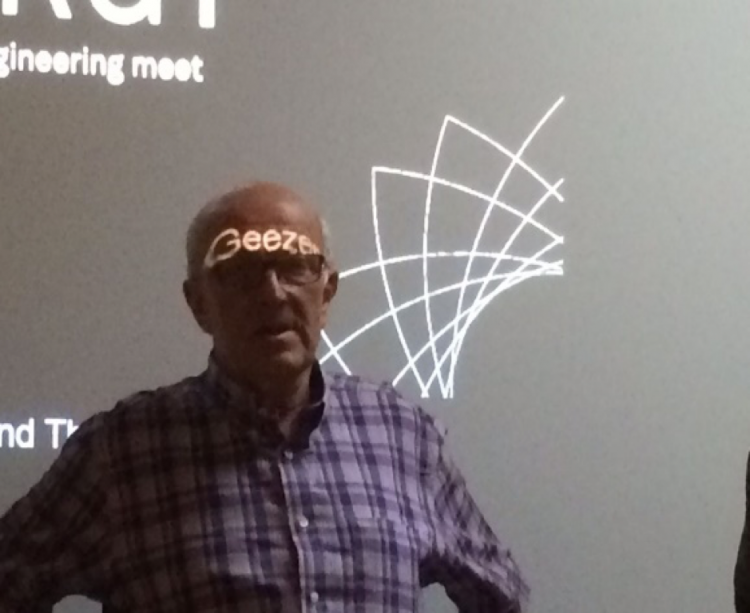 The PowerPoint presentation behind him showed it had over a decade’s existence and highlighted its achievements. Loraine Leeson presented whilst we three Geezers all stood together to the right of the screen and chipped in, explaining that the ethos of Active Energy/ The Geezers was Health & Wellbeing.

There were two other presentations. Hugh Thomas presented My Future, My Choice  – a young people project centred around the waterways in Bristol.  We were shown video clips about the Project and what the children were involved in, with the ethos being Employability and Corporate Engagement.

The third was Nicola Murray, Director of  a Community Arts Project working with young people using natural materials and the environment, with an ethos of Education, based near Saltaire Victorian Mill Village, which is a World Heritage site of historic importance.  We were told about the history of Bristol’s water system by Hugh Thomas and an artistic area near Leeds by Nicola Murray.

Once the three presentations had finished, participants who had attended were invited to pick a presentation that they wanted to engage with in break-out Sessions in nearby rooms which were led by facilitators. Ray, Loraine and I were joined by the facilitator and 5 other people who were interested in learning more about our project and The Geezers in general. Ricky decided to attend one of the other presenters group to find out more about it.

After about 30 minutes, the Break Out Sessions were drawn to a close and we all headed down to the Ground floor where there was a reserved area put aside for drinks and canapes, where we could all casually talk to each other. 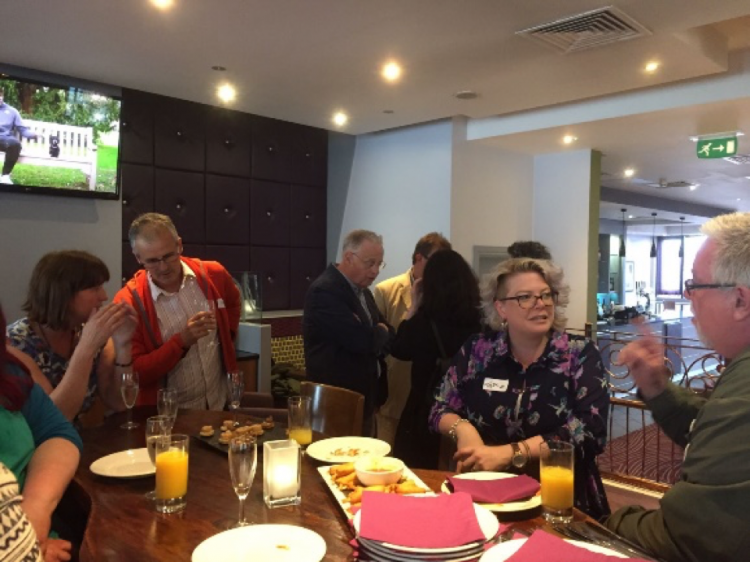 Once we had completed this part of the day, well-fed and watered, we all headed to our hotel rooms that had been paid for by the Trevor Roberts, the Organiser, and were asked to be in reception by 7pm, when we would head off for an Indian meal.

Once washed, dressed and rested we all headed down to reception, before leaving the Jury’s Inn hotel for the short walk to Mumtaz, a waterside Indian Restaurant that alarmingly for most of us, was an alcohol free zone!!! 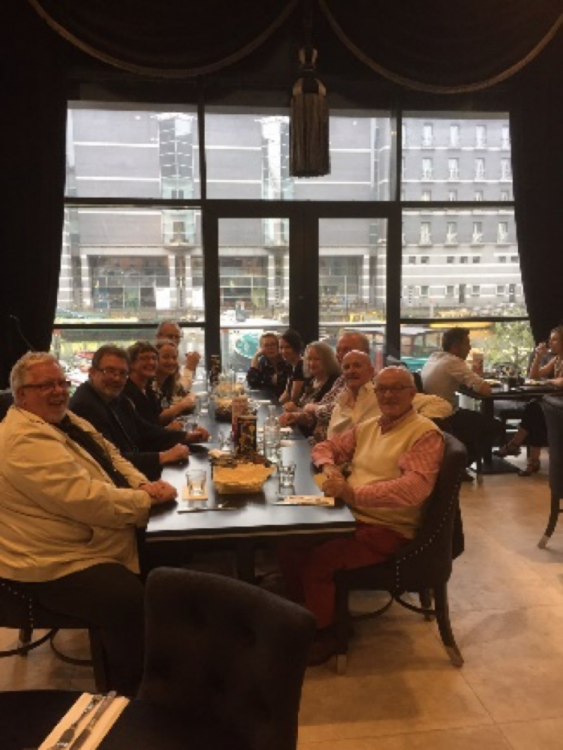 It was one of the swishest Indian Restaurants I had ever been in, that problem aside. We had bottles of water supplied on the table, and the food was excellent.  Near the end of our meal the restaurant began to have lots of Asian people arriving and we realised that this was because of the end of Ramadan. 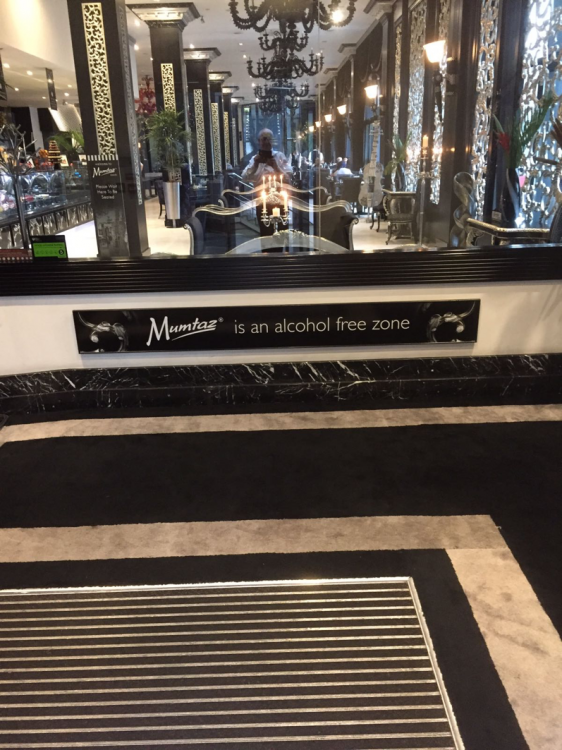 In the three Geezers cases anyway, it was the first Indian they had ever been in that did not serve Lager!  As people might wonder how you can have a Ruby without a Light Ale!!  So to make up for this deficiency we were guided by Trevor Roberts to a proper boozer, not far from our hotel, that was a real, authentic pub that had existed for centuries.  We had quite a few sherbets.  It would be rude not to!!  Until midnight when the pub closed and we headed back to the hotel.

Breakfast was between 7am and 11.30am, the organisers and presenters were invited to gather downstairs for a planning meeting at 10am.  The Geezers decided against this and Ricky and Ray had their breakfast early, well earlier than me,  and went out to investigate some of the Town Centre which was very historic apparently.

I wandered down about 10am, had my Full English breakfast and we gathered together and headed outside our hotel.  Having checked out at noon, and stored our luggage once again behind reception, we set off to the quayside where there was the 10th Leeds Waterfront Festival that had started at 11am, and carried on to Sunday 25th June.  There was live music, DJs, beer stalls and an ice cream van.  We avoided the beer stalls and had a massive vanilla ice cream cone each! 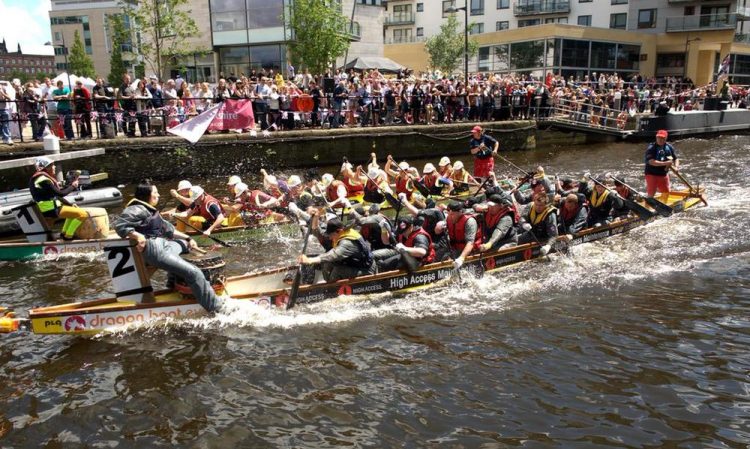 There was Canal Dragon Boat Racing along with other water events, which sadly we missed as well.

Loraine had not joined us in the pub after the Indian as she was proof-reading a book she had written. The plan was to travel back to London at  2.15pm, and she arrived down to meet us in the reception where we picked up our luggage and set off for the short walk to Leeds Station and home.

To finish this piece with a sods-law analogy, on the way up we had not had reserved seats and had real trouble finding somewhere that was not already booked on a very crowded train, so having encountered this problem, the tickets were organised with reserved seating for our return trip, and lo and behold the return train to London was pretty empty, and we could have had umpteen seats each!

We arrived in London Kings Cross shortly after 4.30pm, departed the station and picked up a black cab that Loraine paid for back to East London, where she dropped us off, before heading home herself.  It had been a very interesting, entertaining and friendly trip, all free of cost to us, i.e. the best kind.

Blowing my stereotypical thinking out of the window, I discovered that Leeds, well at least the area we were in, was a really nice city full of historical integrity.

The only other times I had been to Leeds were for Millwall games at Elland Road, which were like being in a police state warzone!  This consists of hundreds of riot police/ numerous Hoolievans/ several rabid alsatians/ a platoon of police cavalry and several helicopters hovering above.

I thought I’d explain what it is like if you are not Millwall as I am.  This visit to Leeds was far more civilised than my previous visits there!