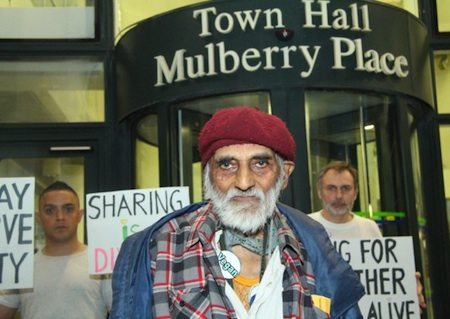 Thousands of people have signed a petition to stop an 82-year-old disabled man being evicted from the house in London’s East End he has lived in for well over 30 years.

People’s champion Andy Erlam pleaded at last night’s Tower Hamlets council’s meeting to reverse a move to take pensioner Angelus Sumesar-Rai to court to get him out of his home at Bruce Road in Bromley-by-Bow.

The petition with 2,500 names has been handed in to the Town Hall to stop the eviction of the Tush housing co-operative which has occupied the house and several others under license since 1983.

“Legal action is no way to solve a community issue,” Erlam urged councillors. “It’s a sledge hammer to crack a nut.

“An eviction would be inhuman and cruel. Council officers made an application to court to evict these people within hours of receiving this petition.”

The dispute was a crisis created by the previous mayor’s administration, he pointed out.

“Tower Hamlets rushed to court too often and spent too much council taxpayers’ money on lawyers,” Erlam added.

“I was shocked sitting in Angelus’s kitchen hearing a council officer pressuring him to leave his home.”

The house is one of 12 original Georgian terraced cottages in Bromley-by-Bow, Whitechapel and Old Ford bought up in a 1970s council slum-clearance programme—but left empty for several years.

Squatters eventually moved in and set up the Tusk housing co-operative in 1983, which managed to get short-term leases from the Town Hall.

The properties where finally earmarked for sale in 2013 by former mayor Lutfur Rahman—but Labour Opposition stepped in and forced a U-turn.

Labour’s Sirajul Islam campaigned to stop the properties being sold off. He tabled a motion last night urging the new mayor to stop the evictions.

“This is another legacy of the previous administration,” Cllr Islam said. “We’re now committed to co-operative principals on housing.”

It was Lutfur Rahman who tried selling off the properties for profit, according to the new deputy mayor Rachael Saunders.

But the ‘old guard’ weren’t having it. Independent Cllr Rabina Khan, who was Rahman’s key cabinet member for housing, claimed the previous administration wasn’t trying to sell off the homes, despite widespread reports.

Negotiations were being made with Poplar Harca housing organisation to return the £500,000 properties to “general rent”. She suggested creating a sheltered accommodation co-operative mentored by another co-op “to enable the current occupiers to live there—but they ought to be rehoused according to their needs”.

Labour’s campaign in 2013 to stop the 12 houses being sold off caused a U-turn by Rahman, the Advertiser reported at the time.

Cllr Islam told the paper: “Selling council homes for a quick cash ‘fix’ is irresponsible. The Mayor has finally listened and stopped trying to sell off family housing.”

Mayor Rahman claimed at a council cabinet meeting later that it was never his intension to sell off the properties, despite evidence by Labour.