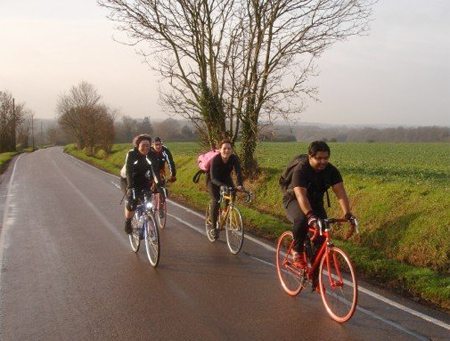 For the record, I’m a regular cyclist, I cycle most days in and around London doing journeys between 2 and 30 miles. Some days I will go out for rides upto 150 miles. I do stop at reds, I use hand signals when turning (right) or when I have a car close behind. My lights are very bright. I rarely use cycle lanes. I tend to cycle in the middle of the lane.

Now I know a lot of drivers get annoyed that I cycle in the middle of the lane. But hey I pay for the road too, just as much as a car does. Road Tax = VED. It’s council tax that goes towards paying for the roads that means the roads belongs to all us who pay it. But aside from that it’s safer to be in the middle. Drivers notice you and they can’t/don’t try and overtake until I let them past. When I am to the side, they zoom past without slowing, no matter how tight the space. Last week I had a driver get out and give me a mouthful because apparently I clipped his car, when what actually happened is that he zoomed past and hit my handle bars with his wing mirror. When I’m in the middle, cars notice me, slow down if they have to and pull up behind me and if it’s safe to do so I let them past by moving over to the left.

I rarely use the  cycle lanes because they are unsafe, have loads of potholes and broken glass, cars randomly parked across them, pedestrians walking out or just suddenly disappear. Sure they might be ok if you are going 6mph and just pootling but not if you’re going much faster than 12mph. That said, the Cycle Superhighways have improved things muchly. It seems they have learnt from their mistakes. They are much wider, and away from the curbs and most drivers now treat it as a another lane of traffic and don’t drive in it.

That said there will always be less proficient cyclists than drivers, but that’s the whole nature of cycling, anyone can do it, young and old, rich and poor, foreigner or Brit. I’m not saying that cyclists have an excuse, I believe no one should ride on the roads until they’re competent/proficient and have safe bikes, how we check for this I have no idea. But on the flip side drivers have multiple lessons and tests, even hazard perception tests and yet accidents and poor/dangerous driving are very common. What plays a very big part is attitude and confidence. Cyclists aren’t idiots and drivers aren’t apes protected by a cage. All it takes is for both sides to be more aware and courteous of eachother and most would be good.

About insuring and registering/numberplating bikes. The system is flawed. Look at how poorly the current system operates. Bikes outnumber cars by an untold amount, they are stolen, upgraded, replaced, borrowed, lent and modified so often it would be near impossible to keep track, they aren’t limited to the road system either. A system capable of doing so would send the costs through the roof, not just for cyclists but for drivers too. It would be easier and cheaper to insure/numberplate people. Seriously, sit down and think about it.

This ol’ debate is getting to me, it matters not how we look, what colour our skin is, how much money we have, what class we’re from or what our vehicle is, at the end of the day we’re all trying to get somewhere, so give a little. Be considerate and have a more enjoyable day.

For every 100 cyclists jumping reds I see, I see no less than about 40% of cars speed up on amber and jump reds in London. For every cyclist I see not indicating properly, I see more cars doing the same. For every cyclist not paying full attention is matched by a driver. Sadly, we’re not that different you and I. We’re just as bad as eachother.