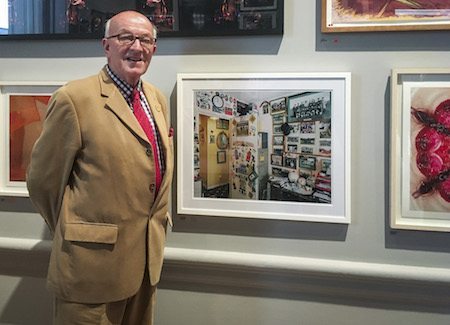 February 2017 brought news of the Traditions Art Exhibition at the Mile End Art Pavilion which ended with a Cockney Quiz hosted by Geezer Barrie Stradling.

In May 2017 artist Loraine Leeson and The Geezers unveiled floating water wheel at Three Mills, part of an Active Energy arts project.

In June Geezer, Ray Gipson, went to the Royal Academy to see Paul Tucker’s photo of his study hanging in the Summer Exhibition. More here.

In July we features local news including the Hackney Wick Open Studios at the end of the month:

August 2017 brought the sad news of the death of Geezer and onetime local boxer Ted Lewis at the age of almost 88.

In October Kate Angus of Link Age Plus, who looks after the Geezers so well had a baby daughter. The Geezers were filmed on stage at the Conway Hall talking about growing old:

In November a mini-documentary “Our East End” featuring the Geezers was shown in the Palm Tree pub. Watch the film here.

December was also a busy month for the Geezers with a talk by Malcolm Barr-Hamilton on the lost pubs of the Isle of Dogs, the Geezers Xmas party, their sponsorship of Dagenham U10s football team, carol singing in the Eleanor, and staring in a promotional Shave the Day video for Tabac!

A big thank you to everybody who has helped the Bow Geezers achieve another great year.

You can keep up to date by subscribing to our local news by popping your email into the box on the RHS of our website.